Invitation for Statements of Interest and Suggestions for Candidates

ICANN's Nominating Committee (NomCom) invites Statements of Interest and candidate recommendations from the Internet community for key leadership positions to fulfill ICANN's technical and policy coordination role. Interested individuals are invited to submit a Statement of Interest to the 2013 NomCom for the following positions:

The NomCom is an independent committee tasked with selecting eight members of the Board of Directors and other key positions within ICANN's structure. ICANN is a not-for-profit, public benefit corporation dedicated to: preserving the operational security and stability of the Internet; promoting competition; achieving broad representation of global Internet communities; and supporting the development of policies appropriate to its mission through bottom-up, consensus-based processes.

Individuals selected by the NomCom will have a unique opportunity to work with accomplished colleagues from around the globe, address the Internet's intriguing technical coordination problems and policy development challenges with diverse functional, cultural, and geographic dimensions, and gain valuable insights and experience from working across boundaries of knowledge, responsibility and perspective.

Those selected will gain the satisfaction of making a valuable public service contribution towards the continued function and evolution of an essential global resource. Considering the broad public interest, those selected will work to achieve the goals towards which ICANN is dedicated in order to facilitate the Internet's critically important societal functions.

Fluency in English is a requirement for all positions. These positions may involve significant international travel, including personal presence at three ICANN Public Meetings held per year, as well as regular telephone and Internet communications. Reasonable direct expenses incurred in the course of service will be reimbursed. Each Board Member may choose to receive compensation, but is not required to do so. (See: http://www.icann.org/en/minutes/resolutions-08dec11-en.htm#3 and http://www.icann.org/en/about/governance/bylaws#VI-22)

Statements of Interest for the positions described above can be submitted through an on-line application form at http://nomcom.icann.org/apply or by contacting nomcom2013@icann.org.

Applications will be considered in confidence and should be received by 15 May 2013 for full consideration. Selections will be announced in early September 2013. Successful candidates will take up their positions following ICANN's Annual Meeting in November 2013.

Candidate recommendations, questions or comments may also be emailed to nomcom2013@icann.org.

Information about the 2013 Nominating Committee is available at http://nomcom.icann.org. 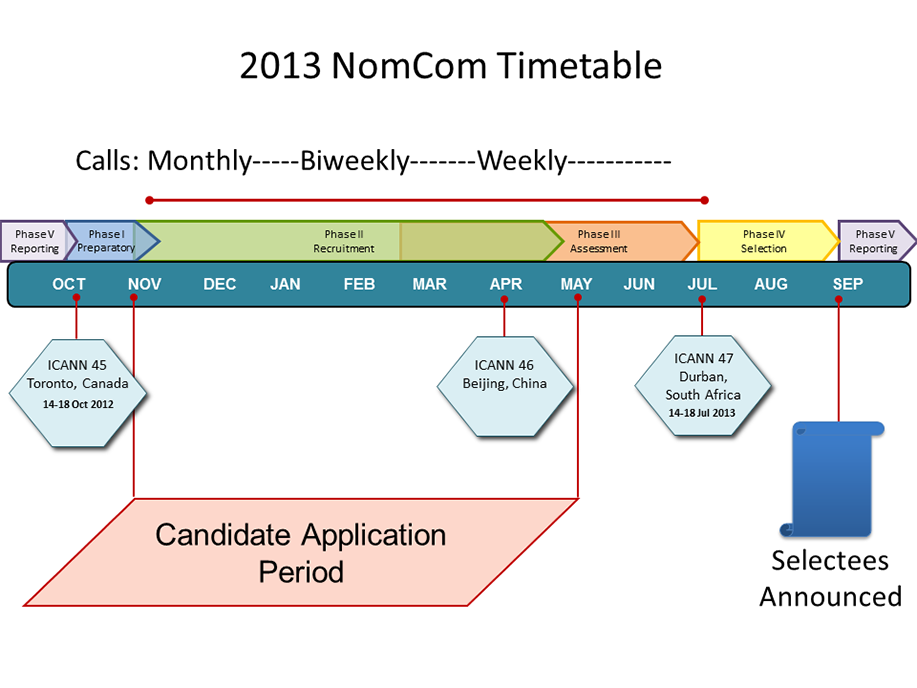 The NomCom is responsible for the selection of eight ICANN Board Members and for other selections as are set forth in the Bylaws. (See Bylaws Article VII, Section 1.)

The NomCom is charged with populating a portion of the ICANN Board as noted above, as well as the ALAC, the ccNSO Council and the GNSO Council. The NomCom complements the other means for filling a portion of key ICANN leadership positions achieved within the Supporting Organizations and Advisory Committees.

The Bylaws also state that the NomCom shall adopt such operating procedures as it deems necessary, which shall be published on the ICANN website.

The NomCom is designed to function independently from the Board, the Supporting Organizations, and Advisory Committees. NomCom members act only on behalf of the interests of the global Internet community and within the scope of the ICANN mission and responsibilities assigned to it by the ICANN Bylaws.

Members contribute to the NomCom both their understanding of the broad interests of the Internet as a whole and their knowledge and experience of the concerns and interests of the Internet stakeholders that have appointed them. The challenge for the NomCom is to integrate these perspectives and derive consensus in its selections. Although appointed by Supporting Organizations and other ICANN bodies, individual NomCom members are not accountable to their appointing constituencies. Members are, of course, accountable for adherence to the Bylaws and for compliance with the rules and procedures established by the NomCom.