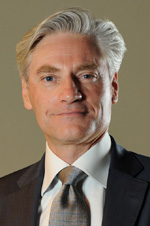 Bertrand de La Chapelle has actively promoted multi-stakeholder governance processes since 2001, building on wide-ranging experience as a diplomat, an entrepreneur and a civil society actor.

In 1986, Bertrand became a French career diplomat, but also accumulated nine years of private sector experience founded on his training as an engineer. Between 1990 and 1998, he founded the consulting department of a leading French technology monitoring firm and was a co-founder and president of Virtools, which provides the world's leading development environment for 3D interactive content.

Bertrand actively participated in the World Summit on the Information Society (WSIS) process between 2002 and 2005 to promote dialogue among civil society, the private sector and governmental representatives. During that time he also served as director of the collaborative platform WSIS-online.

From 2006 to 2010, Bertrand served as France's Thematic Ambassador and Special Envoy for the Information Society, where he monitored all WSIS follow-up activities and Internet governance processes, even acting as a vice-chair of ICANN's Governmental Advisory Committee (GAC) and in 2008 as a member of the Multi-Stakeholder Advisory Group (MAG) of the Internet Governance Forum (IGF).

Betrand was selected by the Nominating Committee to serve on the Board. His term starts following the Annual General Meeting in Cartagena Colombia on 10 December 2010 and will expire on 21 November 2013.