Over the course of three days, Maguy Serad (Senior Director) and Stacy Burnette (Director) meet with government officials from the U.S. Department of Commerce, the U.S. Department of Justice, the U.S. Federal Trade Commission and ICANN community members from the Intellectual Property Constituency, the Commercial and Business Constituency and the Registry Stakeholder Group to share information regarding the new direction of ICANN's Contractual Compliance Program and to receive ideas regarding ways to enhance operations. Candid discussions were held concerning: compliance resources, New gTLD readiness, compliance communications and consumer protection concerns. 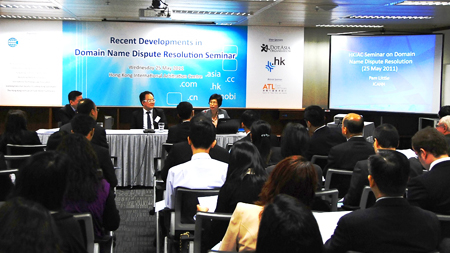 Pam Little, Senior Director of Contractual Compliance was invited to speak at the Seminar on Domain Name Dispute Resolution hosted by the Hong Kong International Arbitration Centre (HKIAC*) in Hong Kong. The seminar was well attended by IP attorneys and n-house counsels based in Hong Kong and from China.

Pam's presentation focused on procedural aspects of the Uniform Domain Name Dispute Resolution Policy (UDRP) and was intended to clarify:

According to the Final GNSO Issue Report on The Current State of the UDRP [PDF, 2.69 MB], many experts agree that procedural aspects of the UDRP could be an area for further improvement.

The AOC Whois Review Team met face-to-face for the first time on 19–20 January 2011 in London. At the Review Team's request for a briefing by Compliance staff, Stacy Burnette attended the meeting and made a well-received presentation on "What is ICANN Doing in Compliance to Enforce the Existing Whois Policy." The Review Team is scheduled to meet face-to-face again at ICANN's 40th International Meeting in San Francisco.

Maguy Serad, Stacy Burnette, Khalil Rasheed and Constance Brown attended ICANN's 42nd International Meeting in Dakar, Senegal 23-28 October 2011. Information regarding ICANN's Contractual Compliance Program was presented to the ALAC, IPC, registry Stakeholder Group, Registrar Stakeholder Group and the Law Enforcement Community during the Dakar meeting. Additionally, all community members were invited to meet contractual compliance staff and ask contractual compliance questions at an all-day compliance outreach event on Wednesday, 26 October 2011. This was a new outreach initiative to allow focused discussions as well as open interactions with all interested members of the ICANN community. The agenda consisted of four sessions; two with a focused topic and two as an open forum for questions and answers from attendees. The focused sessions topics were the Registrar Self-Assessment Questionnaire Review and feedback and Registrar Data Escrow.

Pam Little and Stacy Burnette attended the ICANN 40th International Meeting to be held in San Francisco 12-18 March 2011 (see further details at http://svsf40.icann.org/). They updated the community on progress of new hires and staff changes, as well as two focus areas of enforcement work: registrar port 43 Whois access and the Inter-Registrar Transfer Policy. Staff also consulted and seeked input and comment from the community on a number of Compliance initiatives.