The 2013 Registrar Accreditation Agreement (RAA) requires registrars to take steps to ensure the accuracy of registration data associated with their sponsored gTLD domain names. In particular, the RAA includes obligations relating to the investigation of allegations of inaccuracy, contact information verification, and data format validation.

Within 15 days of the registration or inbound transfer of a domain name, or a change to the registrant information, a registrar must 1) validate that the data format is correct per the applicable country or territory standard(s) ("validation"); and 2) verify the email address or the telephone number of the registrant and the account holder (if different) by sending a communication and requiring an affirmative response in a manner designated by the registrar ("verification"). If the registrar does not receive an affirmative response from the registrant, it must verify the information manually or suspend the registration until it can verify it. If the registrar has previously validated or verified the same information and it is not in possession of facts or knowledge of circumstances that suggest that it is no longer valid, it is not required to take further action. Specific references can be found in the WHOIS Accuracy Program Specification.

Upon being notified of an inaccuracy in the contact information associated with a domain name sponsored by a registrar, the registrar must take reasonable steps to investigate and, where applicable, correct the inaccuracy.

Further, upon the occurrence of a registrant's willful provision of inaccurate information, or its failure to update the information or respond to accuracy inquiries within 15 days, the registrar must terminate or suspend the domain name registration or place it on clientHold and clientTransferProhibited until the data can be confirmed.

On 25 May 2018, GDPR became effective across the European Union countries. On 17 May 2018, the Temporary Specification established temporary requirements to allow ICANN and its contracted parties to continue to comply with ICANN policies and agreements in a manner that does not conflict with the GDPR. The Temporary Specification maintained the existing WHOIS system to the greatest extent possible but restricted most personal data to layered or tiered access.

Neither the Temporary Specification nor the Interim Registration Data Policy modified the RAA requirements for registrars to validate and verify registrant contact information and to investigate claims of inaccuracy.

Enforcement of the Data Accuracy Requirements

Upon receiving a complaint alleging a registration data inaccuracy, Contractual Compliance confirms that:

Complaints that fall outside of ICANN org's contractual scope or lack evidence of noncompliance are closed. Contractual Compliance sends an explanation of the closure reasons as well as alternative avenues to pursue to each complainant. For those that remain open, Contractual Compliance initiates an investigation into the registrar's compliance with the contractual requirements explained above, including the obligation to take reasonable steps to investigate the claimed inaccuracy.

The "reasonability" of the steps will depend on the type of inaccuracy reported. For example, a report of a nonfunctional email address may only require the registrar to perform email verification to ensure the email is functioning. However, if the complaint is about identity (e.g., the registrant is not who they say they are), Contractual Compliance may ask the registrar to provide further information concerning their findings and the results of their investigation specific to the facts of the complaint.

Contractual Compliance will typically close an inaccuracy case when the registrar demonstrates compliance with the investigation and validation or verification requirements, which may include the suspension or cancellation of the domain name registration. The registrar's failure to demonstrate compliance results in escalation through the Contractual Compliance process, which may include the issuance of a public breach notice and that may also may result in the suspension or termination of the registrar's RAA. 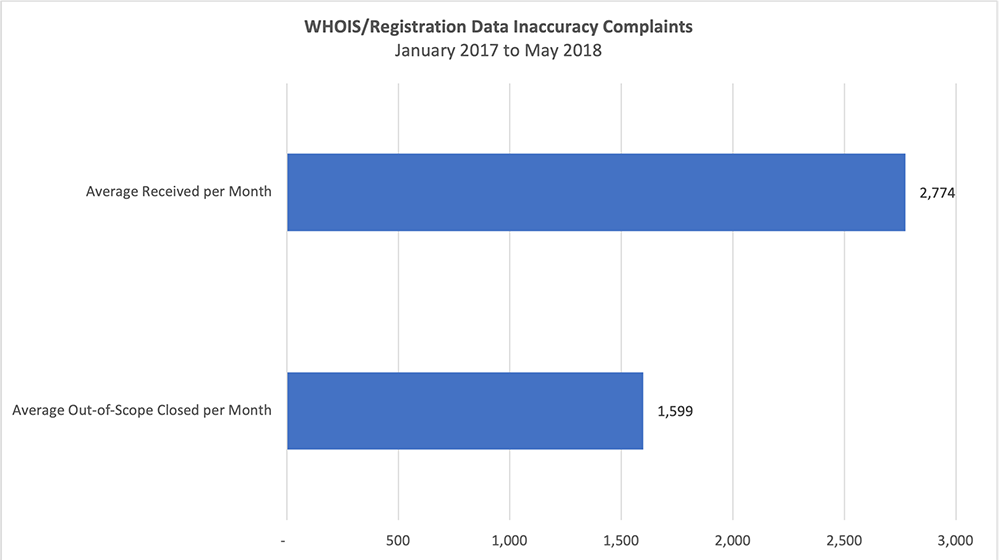 From January 2017 to May 2018, Contractual Compliance initiated 20,834 investigations into registrars' compliance with registration data accuracy obligations: 16,357 in 2017 and 4,477 from January 2018 to May 2018. These investigations resulted from both external complaints and proactive monitoring activities such as the WHOIS Accuracy Reporting System (ARS) project. 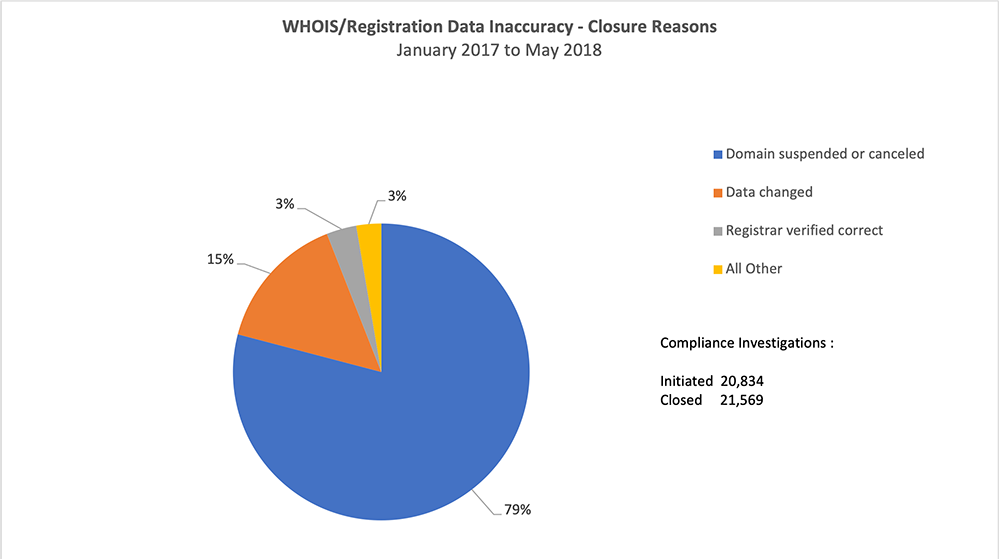 The vast majority of the investigations were resolved within the informal resolution phase.

Eight public breach notices were issued to registrars who failed to demonstrate compliance with their registration data accuracy obligations. Of those: 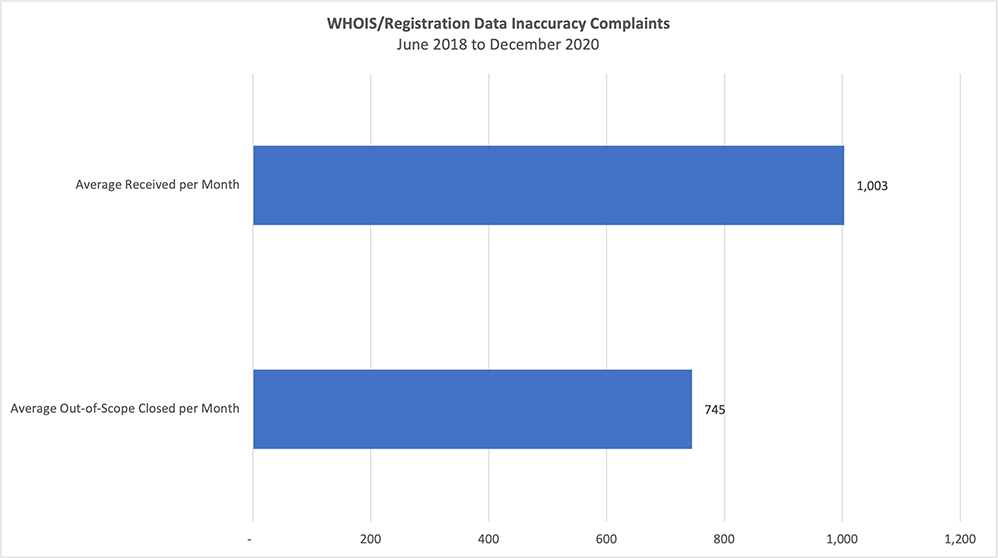 The decrease in complaint volume from a monthly average of 2,774 pre-GDPR to 1,003 post-GDPR resulted from a significant reduction in external complaints and from ICANN org no longer releasing WHOIS ARS reports beginning in June 2018.

In addition, the percentage of complaints received that lacked evidence of noncompliance or fell outside of ICANN org's contractual scope increased. For example, many complainants believe that the registration data is "missing" from the public Registration Data Directory Service (or WHOIS service), privacy or proxy service data are redactions, or all non-European data should be displayed. While Contractual Compliance efforts to educate complainants on contractual requirements increased, the number of actual investigations into registrars' compliance with registration data accuracy obligations decreased.

From June 2018 to December 2020, Contractual Compliance initiated 4,417 investigations into registrar compliance with registration data accuracy obligations (1,860 from June 2018 to December 2018; 2,030 in 2019 and 527 in 2020). During the same time period, Contractual Compliance closed 4,567 investigations into registrars' compliance with registration data accuracy. Some of the complaints that were closed during a reporting period were received in a prior reporting period. This is why the number of closed complaints was larger than the number of complaints received during the reporting period. In 69% of the cases, the registrar suspended or canceled the domain name registration; in 26% of the cases, the inaccurate data was updated; and in 3% of the cases the registrar provided evidence that the data was correct. All other cases represented the final 2%. See Figure 4 below. 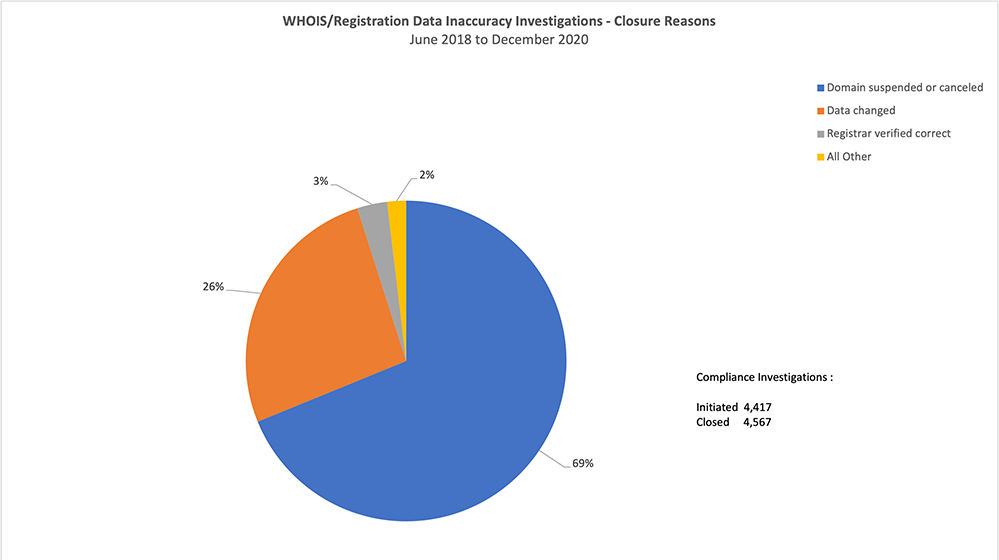 While the number of investigations initiated decreased considerably after GDPR, the outcomes for those investigations were quite similar to those conducted pre-GDPR. During both periods, the majority of complaints resulted in the suspension of the domain name(s), followed by a significant percentage in which the data was corrected.

ICANN org understands the importance of access to accurate data for Internet users, including registrants, law enforcement, intellectual property owners, and cybersecurity researchers. We enforce and will continue to enforce our contractual agreements and the community's policies concerning registration data accuracy. Our ability to enforce these obligations depends on awareness of the existence of inaccurate data through the receipt of external complaints (supported by evidence of inaccuracy) and through our own proactive monitoring activities. As a result of GDPR, potential complainants and Contractual Compliance now lack direct access to registration data. It is therefore not surprising that post-GDPR, the volume of registration data inaccuracy complaints has dropped almost 65% on an average monthly basis.