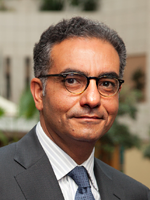 He built a strong executive leadership team that transformed ICANN from a Los Angeles-based organization to one with a global presence with staff in 25 countries and services offered in seven languages.

In 2014, he presided over the most significant milestone in ICANN's history: the United States government's announcement that it would transfer stewardship of the IANA functions to the global Internet community. This step forward is the realization of a longtime goal for the United States and a recognition of ICANN's maturity as a global organization.

That same year, the first registries from the most recent round of new gTLDs came online, commencing the largest-ever expansion of the Domain Name System.

A key proponent for the recognition of multistakeholderism as a key mechanism for advancing global Internet policymaking and governance, he was a founding co-chair of the landmark NetMundial Global Multistakeholder

Meeting on the Future of Internet Governance in April 2014, bringing together diverse stakeholders to create a shared set of principles for the evolution of Internet governance and cooperation. The following year, he advanced ICANN's involvement as a founding member of the new NETmundial Initiative, a multistakeholder initiative to energize bottom-up, collaborative solutions in a distributed Internet governance ecosystem.

Chehadé is a citizen of Egypt, Lebanon, and the United States. He was born in Beirut, Lebanon, to Egyptian parents and left the then war-torn country in 1980 at the age of 18. He speaks fluent Arabic, English, French, and Italian.

Before joining ICANN as its President and CEO in late 2012, he served as Chief Executive Officer of Vocado LLC, a U.S. firm that is a provider of cloud-based software for the administration of educational institutions.

Prior to Vocado, Chehadé was CEO of CoreObjects Software, Inc., a leader in new product software development services for both large and growing companies. He oversaw the expansion of the company to include more than 400 engineers and its successful acquisition by Symphony Services.

Prior to his role at CoreObjects, Chehadé served as the General Manager of IBM's Global Technology Services in the Middle East and North Africa. Based in Dubai, he led a team across an emerging region experiencing high growth. He also built and managed a new global business for IBM, providing managed services to large clients in telecommunications, aerospace and retail to improve the accuracy, depth and timeliness of business information visibility across demand and supply chains.

Chehadé founded and has led three companies since 1987: Viacore, launched in 1999, was the world's leading B2B process integration hub offering a complete solution of specialized software and services for global 500 companies. In 2006 he led Vicaore's successful acquisition by IBM.

RosettaNet, a non-profit multistakeholder company founded in 1997. Chehadé rallied all the leading ICT companies in the world including IBM, HP, Microsoft, SAP, Nokia and Oracle to collaborate on B2B standards. RosettaNet became the high-technology industry's leading eBusiness standards consortium. RosettaNet adopted a multi-stakeholder approach to define and standardize a complete inter-company process language, enabling the ICT sector to use the Internet for real-time process synchronization between thousands of trading partners.

Nett Information Products, launched in 1987 to create and develop an Internet-based content management and sharing solution, successfully weaving hundreds of ICT suppliers and thousands of their resellers into a powerful collaborative business web of applications and content.

Fadi is also the founder of Nilorado, a youth organization raising funds to support schools for handicapped children in Upper Egypt, also delivering bicycles to boys and girls from needy families in that region who otherwise cannot reach their schools.

Chehadé lives in Los Angeles with his wife of 25 years. They are the parents of two adult sons.