DNSSEC – What Is It and Why Is It Important?

Interested in learning about Domain Name System Security Extensions (DNSSEC)? Click the image below to explore our infographic, which describes what DNSSEC is and outlines the benefits of deploying DNSSEC. 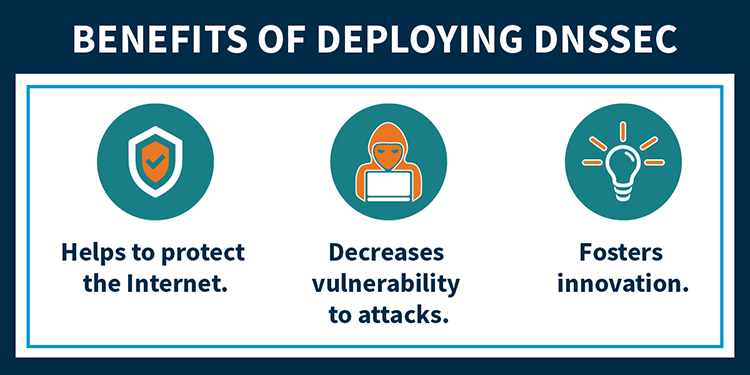 A brief description of how DNS works

The proper functioning of the Internet is critically dependent on the DNS . Every web page visited, every email sent, every picture retrieved from a social media: all those interactions use the DNS to translate human-friendly domain names (such as icann.org) to the IP addresses (such as 192.0.43.7 and 2001:500:88:200::7) needed by servers, routers, and other network devices to route traffic across the Internet to the proper destination.

Using the Internet on any device starts with the DNS. For example, consider when a user enters a web site name in a browser on their phone. The browser uses the stub resolver, which is part of the device's operating system, to begin the process of translating the web site's domain name into an Internet Protocol (IP) address. A stub resolver is a very simple DNS client that relays an application's request for DNS data to a more complicated DNS client called a recursive resolver. Many network operators run recursive resolvers to handle DNS requests, or queries, sent by devices on their network. (Smaller operators and organizations sometimes use recursive resolvers on other networks, including recursive resolvers operated as a service for the public, such as Google Public DNS, OpenDNS, and Quad9.)

The recursive resolver tracks down, or resolves, the answer to the DNS query sent by the stub resolver. This resolution process requires the recursive resolver to send its own DNS queries, usually to multiple different authoritative name servers. The DNS data for every domain name is stored on an authoritative name server somewhere on the Internet. DNS data for a domain is called a zone. Some organizations operate their own name servers to publish their zones, but usually organizations outsource this function to third parties. There are different types of organizations that host DNS zones on behalf of others, including registrars, registries, web hosting companies, network server providers, just to name a few.

DNS by itself is not secure

DNS was designed in the 1980s when the Internet was much smaller, and security was not a primary consideration in its design. As a result, when a recursive resolver sends a query to an authoritative name server, the resolver has no way to verify the authenticity of the response. The resolver can only check that a response appears to come from the same IP address where the resolver sent the original query. But relying on the source IP address of a response is not a strong authentication mechanism, since the source IP address of a DNS response packet can be easily forged, or spoofed. As DNS was originally designed, a resolver cannot easily detect a forged response to one of its queries. An attacker can easily masquerade as the authoritative server that a resolver originally queried by spoofing a response that appears to come from that authoritative server. In other words an attacker can redirect a user to a potentially malicious site without the user realizing it.

As an example of the threat posed by a cache-poisoning attack, consider what happens when a user visits their bank's website. The user's device queries its configured recursive name server for the bank web site's IP address. But an attacker could have poisoned the resolver with an IP address that points not to the legitimate site but to a web site created by the attacker. This fraudulent website impersonates the bank website and looks just the same. The unknowing user would enter their name and password, as usual. Unfortunately, the user has inadvertently provided its banking credentials to the attacker, who could then log in as that user at the legitimate bank web site to transfer funds or take other unauthorized actions.

Engineers in the Internet Engineering Task Force (IETF), the organization responsible for the DNS protocol standards, long realized the lack of stronger authentication in DNS was a problem. Work on a solution began in the 1990s and the result was the DNSSEC Security Extensions (DNSSEC).

DNSSEC strengthens authentication in DNS using digital signatures based on public key cryptography. With DNSSEC, it's not DNS queries and responses themselves that are cryptographically signed, but rather DNS data itself is signed by the owner of the data.

Every DNS zone has a public/private key pair. The zone owner uses the zone's private key to sign DNS data in the zone and generate digital signatures over that data. As the name "private key" implies, this key material is kept secret by the zone owner. The zone's public key, however, is published in the zone itself for anyone to retrieve. Any recursive resolver that looks up data in the zone also retrieves the zone's public key, which it uses to validate the authenticity of the DNS data. The resolver confirms that the digital signature over the DNS data it retrieved is valid. If so, the DNS data is legitimate and is returned to the user. If the signature does not validate, the resolver assumes an attack, discards the data, and returns an error to the user.

Validating and Signing with DNSSEC

In order for the Internet to have widespread security, DNSSEC needs to be widely deployed. DNSSEC is not automatic: right now it needs to be specifically enabled by network operators at their recursive resolvers and also by domain name owners at their zone's authoritative servers. The operators of resolvers and of authoritative servers have different incentives to turn on DNSSEC for their systems, but when they do, more users are assured of getting authenticated answers to their DNS queries. Quite simply, a user can have assurance that they are going to end up at their desired online destination.

Enabling DNSSEC validation in recursive resolvers is easy. In fact, it has been supported by nearly all common resolvers for many years. Turning it on involves changing just a few lines in the resolver's configuration file. From that point forward, when a user asks the resolver for DNS information that comes from zones that are signed, and that data has been tampered with, the user will (purposely) get no data back. DNSSEC protects the user from getting bad data from a signed zone by detecting the attack and preventing the user from receiving the tampered data.

Signing zones with DNSSEC takes a few steps, but there are millions of zones that sign their DNS information so that users of validating resolvers can be assured of getting good data. Almost all common authoritative name server software supports signing zones, and many third-party DNS hosting providers also support DNSSEC. Usually, enabling DNSSEC for a zone with a hosting provider is quite easy: often it entails little more than clicking a check box.

For a zone owner to deploy DNSSEC by signing their zone's data, that zone's parent, and its parent, all the way to the root zone, also need to be signed for DNSSEC to be as effective as possible. A continuous chain of signed zones starting at the root zone allows a resolver to build a chain of trust from the root zone to validate data. For example, to effectively deploy DNSSEC in the icann.org zone, the org zone needs to be signed as well as the root zone. Fortunately, the DNS root zone has been signed since 2010, and all gTLDs and many ccTLDs are also signed.

There is one more step to complete DNSSEC deployment in a zone: the newly signed zone's public key material needs to be sent to the zone's parent. As described earlier, the parent zone signs the child zone's public key, and allows a chain of trust to be built from parent to child.

The next steps for DNSSEC

As DNSSEC deployment grows, the DNS can become a foundation for other protocols that require a way to store data securely. New protocols have been developed that rely on DNSSEC and thus only work in zones that are signed. For example, DNS-based Authentication of Named Entities (DANE) allows the publication of Transport Layer Security (TLS) keys in zones for applications such as mail transport. DANE provides a way to verify the authenticity of public keys that does not rely on certificate authorities. New ways of adding privacy to DNS queries will be able to use DANE in the future, as well.

In 2018, ICANN changed the trust anchor for the DNS root for the first time. Many lessons were learned about DNSSEC during that process. Furthermore, many resolver operators became more aware of DNSSEC and turned on validation, and the world got to more clearly see how the entire DNSSEC system worked. In the coming years, ICANN hopes to see greater adoption of DNSSEC, both by resolver operators and zone owners. This would mean that more users everywhere could benefit from DNSSEC's strong cryptographic assurance that they are getting authentic DNS answers to their queries.