This Newsletter is to inform readers and encourage community dialogue regarding ICANN's contractual compliance program. For more information please see link to past newsletter archive: 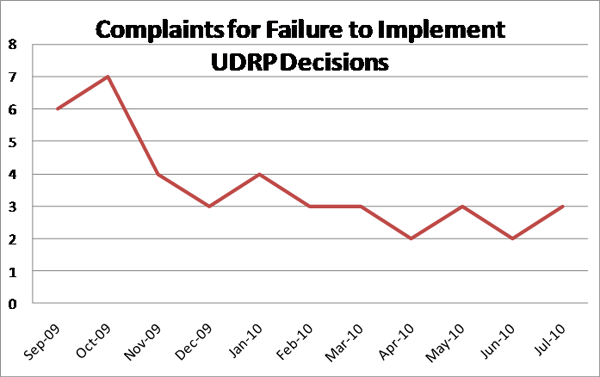 ICANN is pleased to report an upward trend in registrar compliance with the UDRP. Throughout the latter part of 2009 and continuing through July 2010, ICANN observed fewer complaints concerning registrars failing to implement UDRP decisions. At the same time, the number of UDRP decisions increased or remained steady. ICANN tracks cases in which prevailing complainants accuse registrars of failure to implement Provider decisions. During the first seven months of calendar year 2010, ICANN received two to four of these complaints per month. This is down from data from January 2009 through July 2009, when ICANN received on average seven to twelve of such complaints per month.

ICANN attributes the decrease in complaints to several factors. Some factors include registrar outreach and education, enhanced compliance tools such as the UDRP Intake Response System, and stricter monitoring and enforcement of UDRP compliance.

When ICANN is made aware of UDRP noncompliance, ICANN immediately contacts the concerned registrar. During this initial contact, ICANN requests the registrar provide data to justify not implementing the decision. In cases in which the registrar cannot justify its position, usually this contact is sufficient to bring the registrar into compliance. If not, ICANN sends a formal escalated compliance notice. In rare instances when registrars still fail to comply, ICANN issues a breach notice to the registrar. Failing to remedy a breach notice for failure to comply with the UDRP is a strong factor in favor of terminating a Registrar Accreditation Agreement between ICANN and the registrar.

ICANN looks forward to continuous improvement in registrar compliance with the UDRP.

Transfer problems most consistently top all consumer complaints received by ICANN. Usually, they represent 20-30 percent of complaints that ICANN processes. To address this issue, an IRTP Audit Plan was designed and developed by Contractual Compliance with input and feedback from a number of key registrar representatives and various ICANN departments and a beta test on the IRTP Audit Plan was conducted in May 2010.

The primary purpose of the beta audit is to determine if the IRTP Audit Plan is methodologically and operationally sound. It was also designed to:

Audit notices were sent to registrars who were subject to the beta-audit by both email and fax. A copy of the IRPT Audit Plan was attached to the audit notice.

Due to the vast number of transfers occurring each month and the large number of registrars involved, it was not feasible to examine each transfer transaction or each registrar's transfer practices. Instead, random selection mechanisms were used to select four groups of registrars to be audited:

The table below is a summary of the findings based on the 4 registrar groups:

A registrar is deemed compliant if each of its transfer transactions that were subject to the audit was considered in compliance with the IRTP.

Of 119 transfer transactions reviewed, 27 were deemed non-compliant with the IRTP. This translates to 77% of transactions being compliant.

Most transfer-related complaints that were subject to the beta audit concerned either delays/inabilities to obtain the AuthInfo Code, or domains still locked by the registrar of record. The problems seem more prevalent when resellers are involved.

Based on the response provided by groups 3 & 4 registrars, ICANN noted that some of the delays were caused by authentication or validation processes employed by registrars. ICANN recognizes the need for authentication of the Registered Name Holder who requested the AutoInfo Code, but registrars must also be mindful of their obligation to provide the Code within five calendar days of the initial request.

ICANN has stated in its beta audit notice to registrars that “the findings of these beta-test audits are for information only and will not be used as the basis for enforcement action.”

Accordingly, ICANN does not intend to take “formal” compliance or enforcement action against those registrars that are deemed non-compliant with the IRTP or the RAA but Contractual Compliance staff has informed them of their non-compliance and worked with them to help bringing them into compliance with their IRTP obligations.

Below are some of the comments received from registrars:

“Your beta testing request alerted us to the high rate of Nack in December 2009 …our use of Nacking was not compliant with ICANN IRTP in December 2009. We have now reviewed our current procedures in order to correct this situation.”

“..., this process has highlighted to me some weaknesses in how we maintain this information.”

“The audit exercise has highlighted a couple of issues for us:

I am actively addressing both of these issues within our organization to rectify immediately. ”

“We have paid close attention to this matter and discussed the measures to let our transfer policy to comply with the ICANN Inter-Registrar Transfer Policy. There may be a period for us to make a new transfer policy and adjust our system.”

“If our transfer process as described above needs change or improvement, please let us know and we will do our upmost to become compliant as soon as possible.”

“We will introduce a “3 strikes, you are out reseller policy” to make sure our resellers respond to customers' requests for EPP codes in time, as required by the IRTP.”

Further changes to IRTP Audit Plan after the beta audit and formal audits:

A registrar in group 1 suggested some changes to the requested documents/information (as set out in the IRTP Audit Plan). ICANN will incorporate those suggestions, in addition to some changes for clarity in light of registrars' responses to the beta audit. ICANN plans to conduct two rounds of formal audit in accordance with the updated IRTP Audit Plan, with one during the remainder of 2010 and one in the first half of 2011.

In order to help registries and registrars understand their contractual obligations, this newsletter will occasionally include advisory information intended to clarify RAA and Registry Agreement provisions.

For more information please see link to the RAA: http://www.icann.org/en/registrars/ra-agreement-21may09-en.htm

The Asia Pacific Event of ICANN-Accredited Registrars and gTLD Registries was held in Tokyo, Japan on 26-27 August 2010. Further details of the event and the presentations by Contractual Compliance and others are available at http://www.icann.org/en/announcements/announcement-2-10sep10-en.htm.

Contractual Compliance staff also conducted a workshop on the Whois Data Accuracy Study conducted by NORC and made presentations to the following stakeholder groups' meetings during ICANN's 38 th International Meeting in Brussels in June 2010: 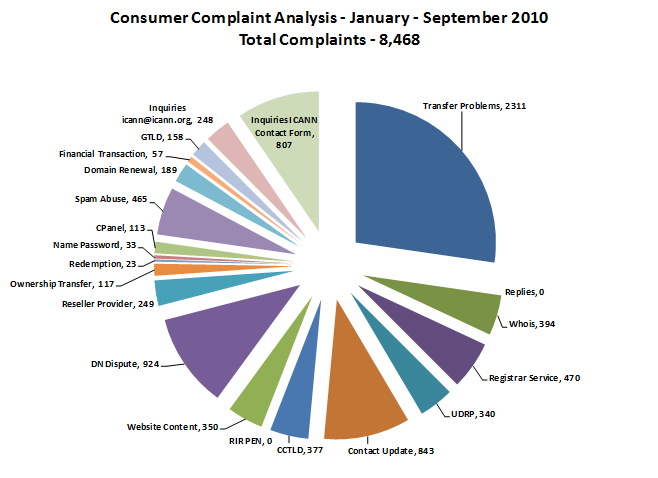 ICANN has a C-Ticket System (see http://reports.internic.net/cgi/registrars/problem-report.cgi ) that captures and tracks complaints filed by the general public. The chart above provides details concerning the categories and number of complaints processed during the first nine months of 2010.

ICANN follows up on all complaints received regarding suspected RAA violations and Registry Agreement violations.

ICANN does not, however, have contract authority to address complaints regarding content, SPAM, data protection, web hosting, data privacy, and financial transactions.

Instead, ICANN forwards complaints to the appropriate parties for handling. ICANN encourages each party to investigate the complaint and report its findings to the complainant and ICANN.

ICANN is working with law enforcement authorities to assist, when possible, in their investigations and prosecution of domain name abuse.

There have been some staff changes within ICANN's Contractual Compliance department.

William McKelligott, Senior Auditor, resigned from his position in May 2010. Senior Director David Giza also left the company in July 2010.

A comprehensive search for their replacements has begun, and in the interim, Pam Little, the Senior Director, Asia Pacific, is acting as head of the department.

Below are the current members of ICANN's Contractual Compliance department: