The establishment of the first Root Zone Label Generation Rules is a significant step forward in developing a multilingual Internet. These rules provide an open and transparent method for determining the validity and variants of top-level domain (TLD) names, or labels, in the world's various scripts and writing systems. LGR-1 is the result of the hard work of the community-based Arabic Script Generation Panel, the Integration Panel and many other contributors. The work benefits current and future Internet users who use the Arabic script by making it easier to navigate the web, and helps address confusion and security issues in using the domain name system – specifically top-level domains.

I would like to congratulate everyone who contributed to achieving this monumental first step!

The community-based Task Force on Arabic Script Internationalized Domain Names (TF-AIDN) started organizing in the second half of 2013 and formally began working as the Arabic Script Generation Panel in February 2014. Arabic is one of the more complex scripts to examine because it is used by several different languages across Asia and Africa, resulting in many variations in the shapes of its letters and use of the script. Minor variations in letters look similar to naive users – even within the Arabic script community – who are not familiar with the breadth of Arabic script usage, causing confusion in labels. For example, Arabic script users can confuse کتاب (kitab, "book") with ڪتاب, the latter interpreted as a stylistic variation. These variations add to the inherent complexity of the script, which already contains context-dependent cursive shapes of letters and many combining marks to indicate both consonantal and vocalic content.

Since the use of Arabic script is so geographically and linguistically diverse, the first challenge for the initial members of the Arabic Script Generation Panel was to recruit representative experts from a variety of disciplines, including linguistics, technology, policy and end-user community. This group worked with ICANN's Global Stakeholder Engagement team to recruit a total of 33 members, representing 21 countries – an impressive variety of Arabic script users!

What followed was an eighteen-month development process involving thousands of emails, scores of online meetings, plenty of lively discussions, some tough linguistic compromises and much hard work. In its progress toward the first LGR, the Arabic Script Generation Panel accomplished three key tasks:

What's next? Allocatable variants of Arabic script top-level domains can now be determined. The community must agree on how such TLDs will be implemented and delegated. This work is in progress and ICANN will soon be seeking community input on the mechanisms that will be used to manage variant TLDs.

Community volunteers for other scripts and writing systems are diligently working to complete LGR proposals for their scripts. Here's a short summary: 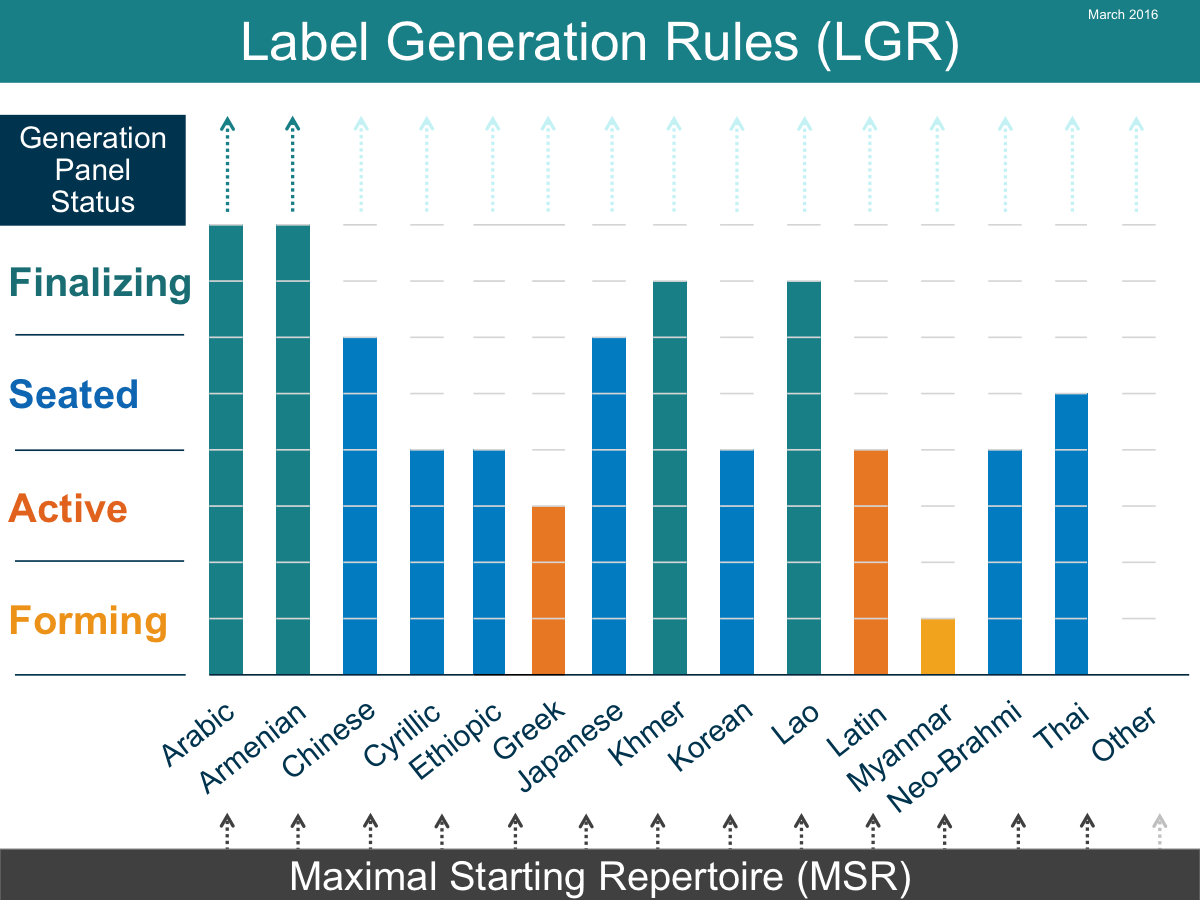 As these script communities finalize their proposals, they will be incrementally integrated into subsequent releases of the LGR, allowing the relevant communities to determine the validity and variants of labels in these scripts.

I am excited by the progress to date and look forward to the completion of more LGR proposals. I am particularly grateful to all of the volunteers who understand the significance of this undertaking and have dedicated such hard work toward making a multilingual Internet a reality.

Congratulation for this progress. I hope everything will continue that well.