Collaborating towards a Truly Multilingual Internet

We use a variety of scripts and writing systems across the globe. To pave the way for the next billion people to come online, we need to cater to and allow for access to a multilingual Internet.

In the context of achieving complete domain names in local languages, different scripts need to be effectively supported. To contribute to this, ICANN has undertaken a significant effort to determine valid top level domains, like .org, .asia, .ca, .sg, and their variant labels, in local languages.

We received very enthusiastic responses from many communities. They have formalized or are forming groups working to develop these rules for their respective scripts and writing systems. These include: Arabic, Armenian, Bengali, Chinese, Cyrillic, Devanagari, Gujarati, Gurmukhi, Japanese, Kannada, Khmer, Korean, Malayalam, Oriya, Tamil, Telugu and Tibetan. These communities have been meeting both face-to-face and using online conferencing tools for their discussions and work.

The work of these groups will pave the way for a truly multilingual Internet in the near future. 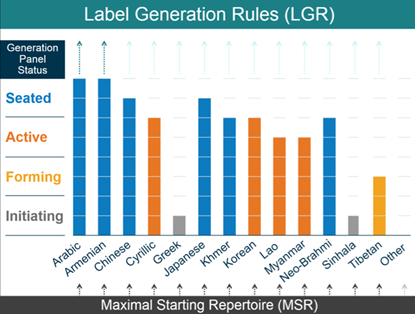 In addition to the work within these specific script communities, there is also a need for some communities to collaborate with each other. It has been very heartening to see many different models of such collaboration emerging.

A primary example has been the coordination and collaboration between the Chinese, Japanese and Korean communities, which share the Han script. Soon after these communities were able to organized, the  coordination began.  It covers two aspects:

First, after each community has identified the characters from Han script they want to use, they need to determine how many of these characters are commonly used by other communities. Currently 6000 such characters have been identified in the context of the top-level domains, and the discussions have not concluded.

The second step is to figure out how variants of these characters will be determined. This is especially challenging because certain characters that look exactly the same have different usage or meaning across the communities. For example, 机 means 'machine' in Chinese but it means 'desk' in Japanese and Korean; however, 機 (the traditional form of the same character) means 'machine' for all the three communities.

These community-based panels need to keep working together to identify and overcome these challenges. It is no simple feat, but resolving these issues will help deploy a secure and stable top-level domain name system.

The representatives of these communities have been meeting face-to-face at ICANN meetings to define the scope of the challenge and determine its solutions, and making significant progress. They recently shared their progress with the larger community at the Asia Pacific Regional Internet Governance Forum (APrIGF) in Macau.

While Chinese, Japanese and Korean communities have to coordinate the single Han script across the multiple panels, the Neo-Brahmi community has to coordinate multiple scripts within a single panel.

The community decided on this approach because these scripts share many of the same traits that are best handled uniformly. For example, the characteristics of an Akshara, as explained by Abhijit Dutta, a member of the Neo-Brahmi Panel: "The alphabet of an NB script has vowels, consonants and special modifiers. An NB script has a "character" as its main standalone constituent. This character, unlike the "English" character, can be a combination of many different elements from the alphabet, numbering from 1 to potentially 9 or 10. Each character is independent and its distinguishing feature is that it can be pronounced in fullness and exist as a complete visual and phonetic unit." 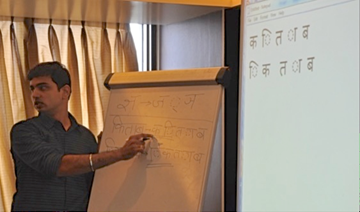 Akshat Joshi from Centre for Development of Advanced Computing

The Neo-Brahmi script panel recently met in Pune, India, to chart out their challenges and how to best address them.

Similar collaborative efforts already have been identified by the Lao script panel, as they may need to work with Thai and possibly Khmer script communities. There is an equally challenging need for cross-panel collaboration among Armenian, Cyrillic, Greek and Latin scripts. The Armenian script panel has already published a comparative analysis as part of their proposal and posted it for public comment.

Asia Pacific is home to many complex scripts and writing systems. Therefore,  equally substantial contribution and collaboration is needed to ensure that these scripts are fastidiously and securely integrated to support top-level domains. A first step is to raise awareness of this ongoing work, followed by facilitating this coordination among script communities. ICANN looks forward to the exciting partnerships being developed within and across communities in our region to enable a truly multilingual Internet.