ICANN is compiling updates on the community discussions and progress of the IANA Stewardship Transition and Enhancing ICANN Accountability Processes. This information is positioned to help inform interested stakeholders in the recent developments in the processes, upcoming key dates, latest documents and drafts and a snapshot of any news coverage that occurs over the timeframe.

Chartering organizations approved the proposal on the understanding that the necessary accountability mechanisms will be included in the final proposal for Work Stream 1 of the Cross-Community Working Group on Enhancing ICANN Accountability (CCWG-Accountability).

While the names proposal has now been forwarded to the ICG, the CWG-Stewardship will not disband yet. Outstanding work still to be conducted includes:

The CWG-Stewardship will continue to retain external legal counsel to assist in responding to any questions or input from the other operational communities the ICG on issues, such as the IANA trademark issue, and in developing an implementation plan for the proposal.

During the public comment period on the initial draft report [PDF, 2.05 MB] of Work Stream 1 accountability enhancements, there were a number of community concerns about the proposal to move ICANN to a mandatory member or "designator" model. In response to these concerns, onsite at ICANN 53, the CCWG-Accountability Co-chairs encouraged all of its members to pitch any alternative model that might better suit the needs of the different communities that together create the ICANN community.

A potential compromise model called the "Empowered SO/AC" model emerged, in which each Supporting Organization (SO) and Advisory Committee (AC) has the choice of if, and when, to become a member (or designator) of ICANN. Under this model, all SOs and ACs would, by default, have all the benefits of the enhanced ICANN accountability framework, excluding the ability to use the courts as a method of enforcement. However, the power of enforceability could be claimed at any time, should an SO or AC choose to do so, by changing the SO/AC's status to become a formal member (or designator) of ICANN. Initial indications are that both the Designator and Member models could be applied under the Empowered SO/AC model, and the CCWG-Accountability is seeking legal advice on the most appropriate way forward. As the CCWG-Accountability is concentrating its efforts on determining an agreeable model before the target start date for its next public comment period at the end of July, the Co-chairs have announced that the summary of comments on the first comment period, originally due 29 June, will now be completed by early August.

On 6 July, the ICG replied [PDF, 71 KB] to the NTIA's letter of 6 May [PDF, 575 KB], which asked for information about the timeline for completing the transition. The ICG noted there are three remaining phases of the transition process:

Based on these three phases, the ICG has suggested to the NTIA that the earliest date at which the transition of stewardship is likely to be completed is July 2016.

The Co-chairs of the CCWG-Accountability have also replied to the NTIA, noting that the July 2016 completion date for their work is a best-case scenario, and that it may be necessary to extend the implementation of Work Stream 1 accountability mechanisms through to September 2016. 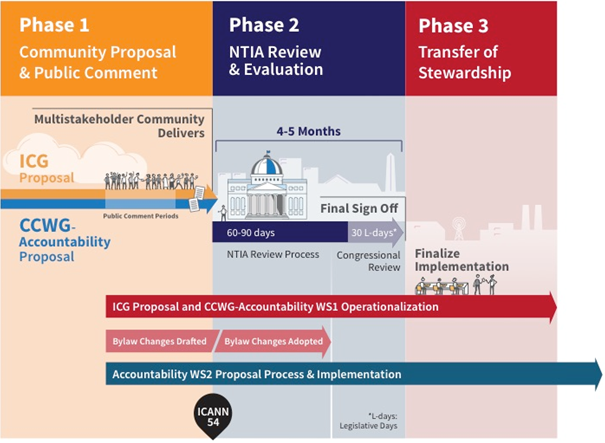 Updates on other transition-related activities

IANA stewardship in the news

You can play a role in IANA's future…

Anyone can participate in discussions about the future of IANA's stewardship and ICANN accountability. For information on joining CCWG-Accountability, contact accountability-staff@icann.org.

Compiled on behalf of ICANN by Samantha Dickinson | 9 July 2015

1The final proposal by the CWG-Stewardship contains placeholder text about the IANA trademark and domain name registration, and contains no concrete proposal on how these issues should be handled. The group provided clarification to the ICG on its Final Proposal text on 2 July.