After extensive consultation with the At-Large and the broader ICANN community, including a formal public comment process, and ongoing engagement and participation of the At-Large Review Working Party, ITEMS International, the independent examiner for the review of the At-Large organization, has issued its final report [PDF, 4.08 MB]. This marks an important milestone in ICANN's commitment to continuous improvement, accountability and transparency.

In the final report, the independent examiner states "Our Review findings are both encouraging and a call to action. Encouraging as there is clearly widespread support for the mission of At-Large to contribute to ICANN policy-making processes through the provision of advice that takes into account Internet end users' interests (few people doubt that the At-Large Community has a vital and continuing purpose within ICANN). But a call to action as the At-Large Community is often perceived to be run by an unchanging group of individuals whose commitment to upholding end-users' interests is sincere, but who have struggled to make contemporary end-user input into policy advice processes a reality….ITEMS International offers 16 recommendations that it believes reflect the needs of the At-Large community and for which there is sufficient community consensus. There were some cases where agreement with the current At-Large leadership was not reached, but which Reviewers strongly believe need to be implemented in the interests of the At-Large community and the ICANN organization as a whole."

The At-Large Review Working Party will now provide their input on feasibility, focusing on prioritization of recommendations and alignment with other improvements already planned or underway, in preparation for eventual implementation of Board-approved recommendations. The ICANN Board is expected to take action on the findings and recommendations towards the end of 2017, after consideration of all community input.

Final Report of Review of the At-Large is available here [PDF, 4.08 MB]; it also can be accessed from the At-Large Review web page.

What is the significance of the At-Large Review?

The At-Large Advisory Committee (ALAC) has the duty to understand, represent, and advocate for the best interest of Internet end users worldwide by focusing on two general areas of work: policy advice development and organization building.

Based on direction from the Board, the purpose of the Review was to determine 1) whether the organization, council or committee has a continuing purpose in the ICANN structure, and 2) if so, whether any change in structure or operations is desirable to improve its effectiveness, and 3) whether the organization, council or committee is accountable to its constituencies, stakeholder groups, organizations and other stakeholders. This review, like reviews of other structures within ICANN, is mandated by ICANN's Bylaws. The Organizational Effectiveness Committee of the Board is responsible for review and oversight of policies relating to ICANN's ongoing organizational review process.

How is the At-Large Community involved?

At-Large Review by the Numbers 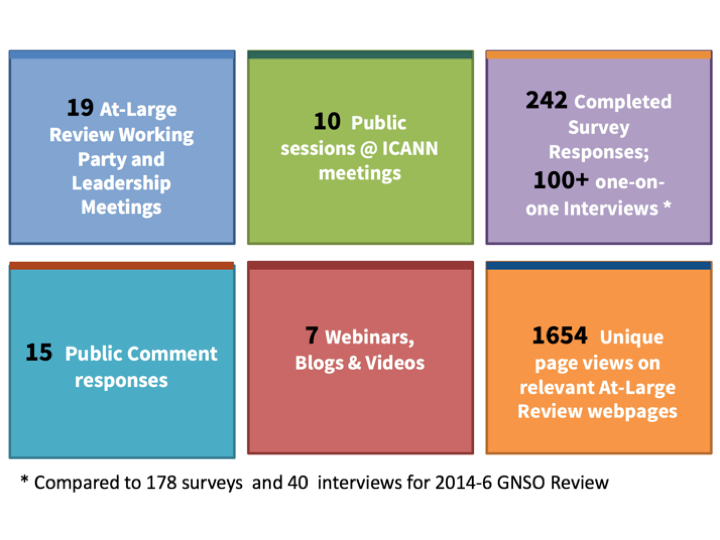