The ICANN 2015 Nominating Committee (NomCom) is pleased to announce its selections for nine leadership positions within ICANN. (See alphabetized list for each ICANN body below) 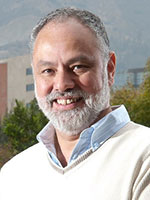 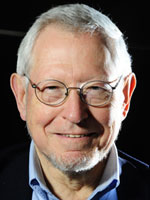 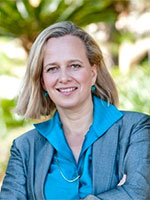 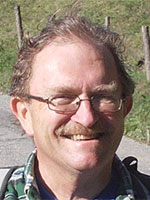 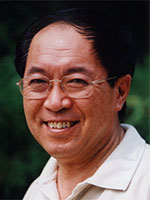 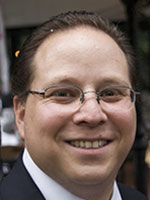 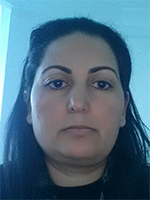 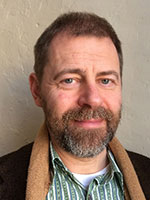 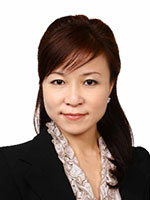 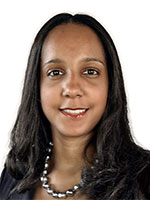 Those selected will take up their positions after the end of ICANN's Annual General Meeting, which will take place during the ICANN Public Meeting scheduled for 18-22 October 2015 in Dublin, Ireland.

The NomCom is charged with recruiting and selecting a portion of ICANN's leadership. The NomCom is mandated to ensure that ICANN's overall leadership is diverse in geography, culture, skills, experience and perspective. The basic criteria is that selectees are people of integrity, objectivity, sound judgment, support decision-making within groups, work effectively in English, understand ICANN's mission and operation, are committed to its success, have experience in world affairs, contribute to cultural, professional and geographic expertise, and can work long and hard, generally as volunteers, for the global public trust.

An independent body at the community's service

Discussing the 2015 Nominating Committee results, Stephane Van Gelder, the Chair of the 2015 NomCom, shared the following:

"As Chair, it is my honor, pleasure and duty to report that the 2015 Nominating Committee has completed the task assigned to it by the ICANN Community and made the selections shown above.

By the close of the application period on 15 March 2015, the 2015 Nominating Committee had received 81 applications for the nine positions it was tasked with filling.

Once this work was completed, the 2015 Nominating Committee was then called upon to select a replacement for the position of North American ALAC representative, following the resignation of its previous selectee to that position and received nine applications for that position.

I want to thank the Nominating Committee members for working diligently through these two separate processes. It is rare that a NomCom gets called back to reselect for another position once its main slate for the cycle has been decided. This year's members had to withstand the added pressure of this late selection, whilst continuing to work as a group fully independent of ICANN's SOs, ACs and the Board. They rose to this challenge and completed their assigned tasks with aplomb and integrity.

Throughout the year, the Committee has reported on its processes through Report Cards, video updates and documents published on its webpage (https://www.icann.org/nomcom2015).

During this year's Annual General Meeting in Dublin in October, the Committee will present the ICANN Community with a Final Report detailing its work and providing in-depth data on the applications received."

As noted above, the 2015 NomCom received 81 Statements of Interest from candidates all over the world (12 female and 69 male) during its open nomination period from 8 December 2014 to 15 March 2015.

Opening for an ALAC Representative from the North American Region

The Internet Corporation for Assigned Names and Numbers' (ICANN) Nominating Committee (NomCom) was recently notified that the At Large Advisory Committee (ALAC) North America region representative, appointed by ICANN's 2014 NomCom has resigned. The NomCom invites interested individuals from the North America region to apply to become an ALAC representative for the remainder of the current term, starting at the conclusion of the ICANN Annual General Meeting (AGM) in 2015 in Dublin in October, and ending at the ICANN AGM in 2016.

The ALAC is the ICANN body responsible for representing the voice of the end user in policy and operational discussions. For more information on the work of the ALAC see http://www.atlarge.icann.org/.

North American citizens who submitted applications in 2014, will be invited to update their applications and have them considered by the NomCom.

This position requires regular participation in teleconferences and may involve international travel, including travel to ICANN's three annual Public Meetings.

Fluency in English is a requirement for this position.

All applications are confidential and should be received by 12 August 2015 (23:59 UTC) for full consideration. The selection will be announced in September 2015. The successful candidate will take up the position following ICANN's AGM in Dublin, Ireland in October 2015.

*Per Article VI, Section 5 of the ICANN Bylaws, ". . . at all times each Geographic Region shall have at least one Director, and at all times no region shall have more than five Directors on the Board (not including the President). As used in these Bylaws, each of the following is considered to be a 'Geographic Region': Europe; Asia/Australia/Pacific; Latin America/Caribbean islands; Africa; and North America." For additional information see Board Geographic Diversity section below. 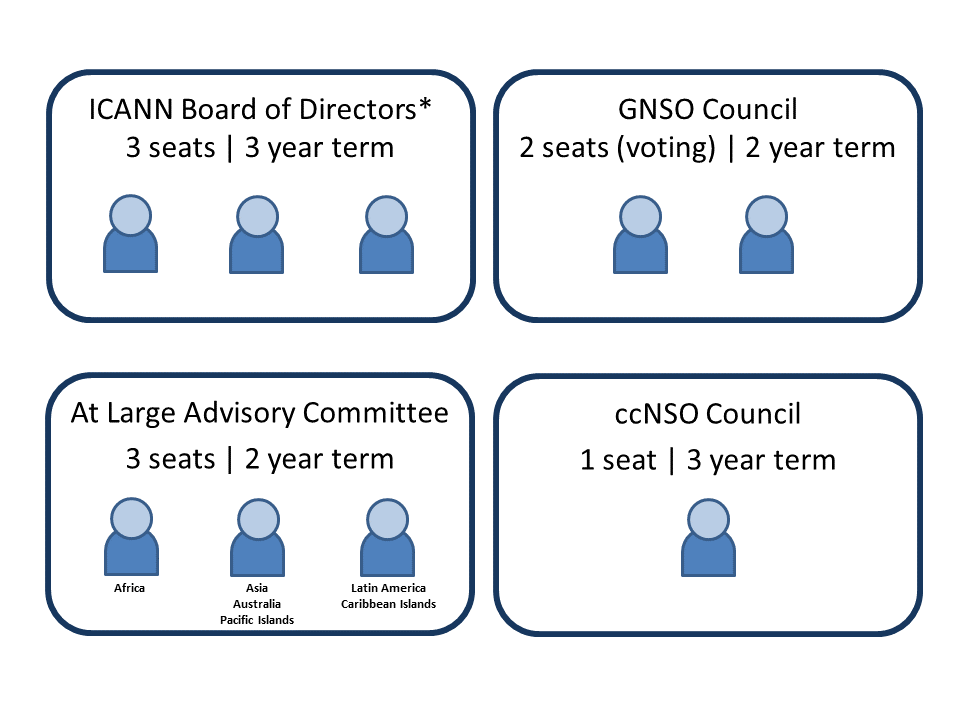 Individuals selected by the NomCom will have a unique opportunity to work with accomplished colleagues from around the globe and help shape the Internet's technical coordination and policy development.

Those selected will also gain valuable insights and experience from working across boundaries of knowledge, responsibility, culture and geography. They will be making a valuable public service contribution towards the functioning and evolution of this essential global resource. Guided by the broad public interest, those selected will work to fulfill ICANN's mission to coordinate the global Internet's systems of unique identifiers, and in particular to ensure its stable and secure operation.

Fluency in English is a requirement for all positions.

Reasonable direct expenses incurred in the course of service will be reimbursed.

Each Board Member has the option to receive compensation in accordance with the resolution passed by the Board on 30 July 2014, but is not required to do so. (See https://www.icann.org/resources/board-material/resolutions-2014-07-30-en#2.b.)

All applications are confidential and should be received by 15 March 2015 (23:59 UTC) for full consideration. Selections will be announced in August or September 2015. Successful candidates will take up their positions following ICANN's Annual Meeting in October 2015.

Candidate recommendations are encouraged and can be submitted through an online form at http://nomcom.icann.org/suggest. If you have any questions or comments, please email: nomcom2015@icann.org.

The graph below shows the current geographic diversity of ICANN's Board of Directors (not including ICANN's President and CEO): 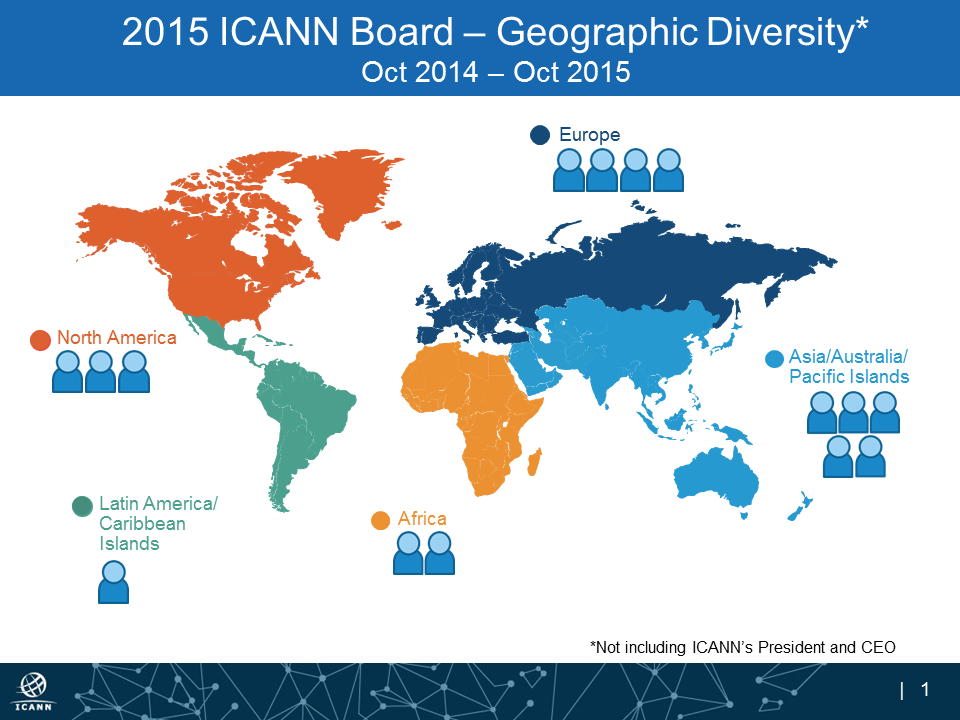 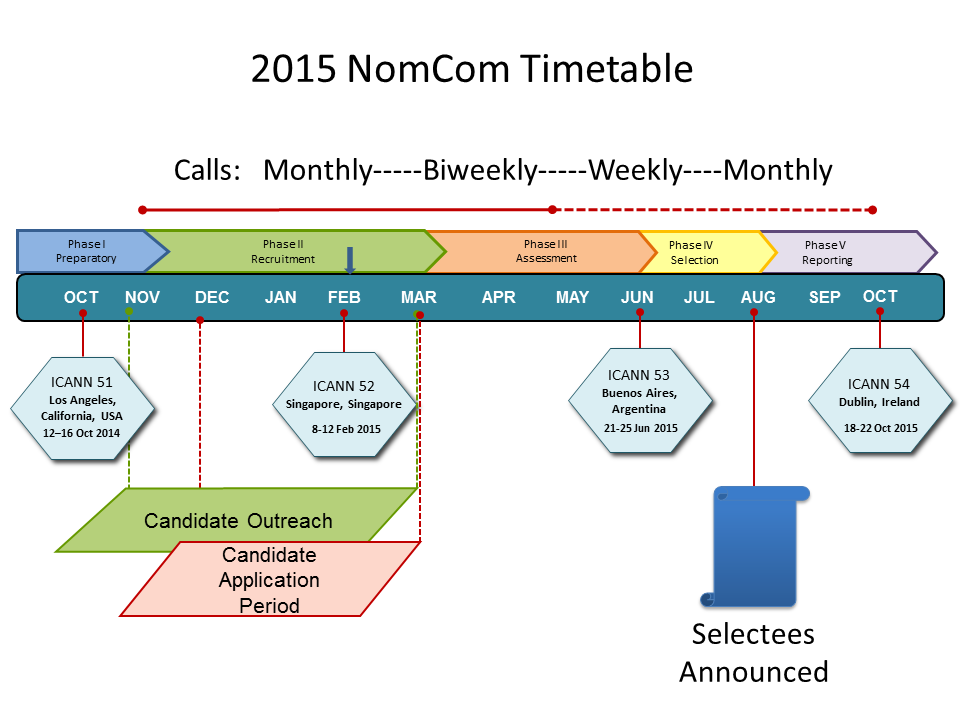 The NomCom is an independent committee tasked with selecting eight members of the Board of Directors and other key positions within ICANN's structure.

It is designed to function independently from the ICANN Board, Supporting Organizations, and Advisory Committees. NomCom members act only on behalf of the interests of the global Internet community and within the scope of the ICANN mission and responsibilities assigned to it by the ICANN Bylaws.