What is the Task Force on Arabic Script IDNs (TF-AIDN) Up To? 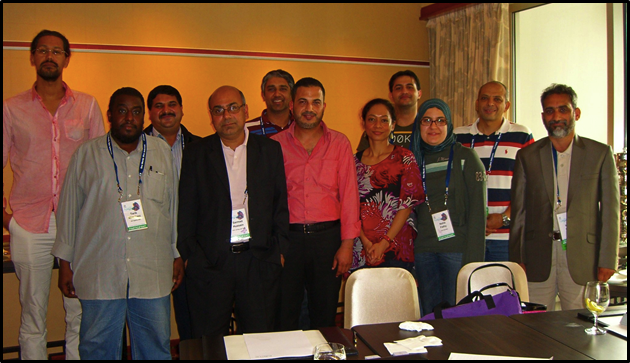 Since the last update on the TF-AIDN, and in addition to the Label Generation Ruleset (LGR) work undertaken by the task force, the group has been working on several initiatives in an effort to benefit the Arabic Script community from its work. The task force has also been working on spreading its work to the widest relevant communities as possible to ensure that such work is as comprehensive and as beneficial as possible.

The group had its first face-to-face meeting in Singapore during March 20-22 right before the start of the ICANN 49 meeting. 10 members of the task force were physically in Singapore 9 of which were funded by ICANN through the Middle East Strategy, while others joined remotely. The 3-day agenda covered many topics that revolved around Inclusion/Exclusion/Deferral of Code Points, Arabic Script Variants, and Review of Maximal Starting Repertoire (MSR).

The group also benefited from being in Singapore to attend the ICANN week and engage with community members. The group had closed meetings with the Board IDN Variant Working Group (BV-WG), the Integration Panel (IP), the Global Domains Division (GDD), and with other Generation Panel (GP) members. The group was also present at relevant sessions to listen and engage in the discussions.

Principles for Inclusion, Exclusion or Deferral of Code Points for Arabic Script LGR for the Root Zone

The TF-AIDN was the first linguistic group to come out with such principles [PDF, 22 KB], and the output document has been released for public comments. While the initial code point level analysis has been completed, the group is still to finalize the code points for inclusion and exclusion from LGRs. The group is further discussing Arabic Script IDN Variants and defining general principles.

Expansion of Scope and New Membership

The TF-AIDN has decided to expand the scope of their work to include work on Universal Acceptance of Arabic Script IDNs, as well as Arabic Script email support. This additional work load has led the group to announce the need for more community members to be part of task force, and 5 community members so far have responded to the call expressing their interest in being part of this group. The call is still open for those interested in joining.

Workshop Proposal Submission to the Global IGF in Istanbul

In order to show the global Internet community the importance of having such multistakeholder linguistic groups to tackle script and linguistic issues, the TF-AIDN has decided to submit a workshop proposal to the global IGF in Istanbul, Turkey during September 2-5, 2014. The workshop; entitled “Linguistic Diversity through Script Harmony” intends to:

…bring together representatives of different script communities undertaking cross-regional efforts to develop the Root Zone Label Generation Ruleset (LGR) for enabling the IDNs and their variants. The community representatives will share the current challenges in bringing different communities together, status of developing cross-community collaborations for this purpose, and balancing linguistic and technical issues to develop the LGR.

Attendance of Relevant Events and Gatherings

In order for the TF-AIDN to showcase its work and seek feedback/advise/tips, seek new membership to the TF, and at the same time be a source of encouragement for other linguistic communities, members of the TF-AIDN attending relevant events and gatherings will present their findings to the audience. So far, the outcomes of the group have been presented during the ME DNS Forum, the ICANN Singapore Meeting, and the APTLD Muscat Members Meeting. Other fora include the ICANN London Meeting, the IGF Meeting in Istanbul, and the Arab IGF, amongst others.

The TF-AIDN will have its next F2F meeting in Istanbul, Turkey during June 8-12, 2014. The 5-day meeting will cover LGR discussions (June 8-10) as well as Universal Acceptance (June 11-12). Again, ICANN will be funding some task force members to attend this meeting.

In order to prepare for the meeting, the task force is currently working in 3 parallel sub-groups with one covering Variant Principles, another covering Code Point Analysis, and a third finalizing the agenda for this 2nd meeting.

Since the TF-AIDN worked on the Arabic Script Generation Panel document, the Arabic Script GP has a dedicated wiki space at https://community.icann.org/display/croscomlgrprocedure/Arabic+Script+GP. This space shows all documents, comments made, and work status, amongst others.

Also, the TF-AIDN submitted comments to the MSR-1 Call for Comments. The response to the comments made is posted at http://forum.icann.org/lists/comments-msr-03mar14/msg00011.html.

The Middle East Strategy Working Group (MESWG) is an ad-hoc group of Internet experts from the region the strategy covers; i.e. the 22 Arab States, Iran, Afghanistan, and Pakistan (collectively defined as “The Region”). The working group consists of 21 experts from 11 countries of the region. ICANN has coordinated the formation of the working group, and provides all the necessary support to drive its mandate. ICANN’s strategic goals for its engagement in the region are to:

More on the MESWG can be found on the dedicated Wiki online at https://community.icann.org/display/MES/Middle+East+Working+Group.

thank you for help and t=good hart