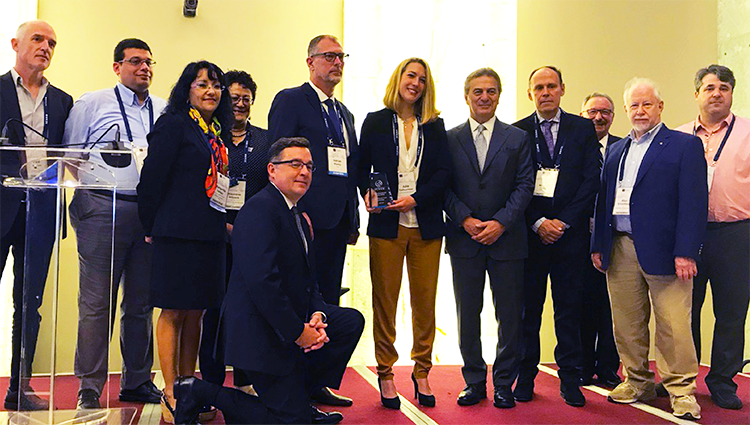 PANAMA CITY – 25 June 2018 – The Internet Corporation for Assigned Names and Numbers (ICANN) is honored to announce the recipient of the 2018 Multistakeholder Ethos Award. This year, the community selection panel posthumously recognized a long-time member of the ICANN community: Stéphane Van Gelder. The award was presented today at ICANN62 in Panama City to Stéphane Van Gelder’s wife Julie Talfournier Van Gelder.

Community member Keith Drazek presented the award on behalf of the community selection panel. He enumerated Stéphane Van Gelder’s many contributions and attested to how he was admired for “his passion, his fairness, his ability to find the best in people, and his true gift for uniting people.”

Cherine Chalaby, Chair, ICANN Board, and Göran Marby, President and CEO, ICANN, also remembered Stéphane Van Gelder. Chalaby stated that Van Gelder’s “impact on the ICANN community, and many of us individually, cannot be overstated.” Marby urged community members present to continue in Stéphane Van Gelder’s spirit and “see the people behind the discussions.” Marby turned the podium over to Julie Talfournier Van Gelder, who spoke movingly about her husband, a man who she said “helped reveal the strength and skills in so many people.”

A unique point that stood out from the beginning of the community selection panel’s process was that Stéphane Van Gelder received nominations or endorsements from at least 10 different community groups, and also from several individuals and community leaders. It was an unprecedented level of support and something that the selection committee immediately recognized as important. The breadth and depth of cross-community support spoke directly to his impact representing each of the award’s criteria – breaking down silos, working across multiple groups, engaging in a collegial manner, and a record of substantive and meaningful contribution over many years.

Stéphane Van Gelder’s contributions were distinct, and the level of support from the ICANN community was undeniable. From 2008 to 2012, he served on the Generic Names Supporting Organization (GNSO) Council as an elected representative of what was then called the Registrars Constituency (now the Registrar Stakeholder Group). On the GNSO Council, he served as vice chair in 2010 and was elected and served two consecutive terms as chair in 2011 and 2012. During his tenure as GNSO chair, Van Gelder oversaw and shepherded multiple key projects, including:

Van Gelder was also a long-time contributor to the ICANN Nominating Committee, beginning in 2013, serving as its chair in 2015 and associate chair in 2017.

He was a well-respected and much appreciated member of not only the GNSO, but of the broader ICANN community.  His genuine passion, energy, and commitment to ICANN’s mission and his achievements in various roles across the community were second to none. All of these qualities and accomplishments strongly support the selection of Stéphane Van Gelder as the recipient of ICANN’s 2018 Multistakeholder Ethos Award. At this time when we celebrate his contributions, ICANN also extends our deepest condolences to his family, friends, and colleagues.

Launched in 2014 at ICANN50, the Multistakeholder Ethos Award recognizes ICANN participants who have invested in consensus-based solutions, acknowledged the importance of ICANN’s multistakeholder model of Internet governance, and contributed in a substantive way to the higher interests of ICANN’s organization and community.