Earlier this year, we posted information on ICANN’s finances: http://blog.icann.org/2010/07/icanns-finances-at-a-glance/. Now that the FY10 audit is complete, we thought it would be helpful to provide an update for the community.

First, the audit. Moss Adams, ICANN’s independent auditor and the 11 th largest public accounting firm, issued a “clean” opinion on the FY10 financials: http://www.icann.org/en/announcements/announcement-27oct10-en.htm. This is the 11 th year that ICANN has received a clean opinion, and the independent auditors’ report to the Audit Committee indicated that internal controls are as strong as they’ve ever been. There’s always more work to be done, but we’ve made good progress on financial controls.

Next, the Internal Audit function. The Audit Committee of the Board this year directed the creation of an Internal Audit function to ensure that accounting at ICANN is excellent and that the Board and Community remain confident in all financial controls. Grant Thornton, one of the largest accounting firms in the world, was engaged to serve this function for ICANN. They have initiated their work, and identified areas for improvement. This is especially important as ICANN continues to face budget pressures and looks to the potential growth from the new gTLD program. Compliance with both US and international guidelines remains of critical importance.

ICANN’s overall financial picture remains strong. The Reserve Fund recently passed $50 million with investment growth in FY10 overcoming the market losses of FY09. In FY10, contributions to net assets were $11.4 million. This is $6.8 million more than the $4.9 million originally expected when the FY10 budget was adopted. The positive variance is explained by the following:

The following chart is a summary of the FY10 financial results and a more detailed analysis of the accounts have been posted here: http://www.icann.org/en/financials/variance-analysis-30jun10-en.pdf [PDF, 68 KB] 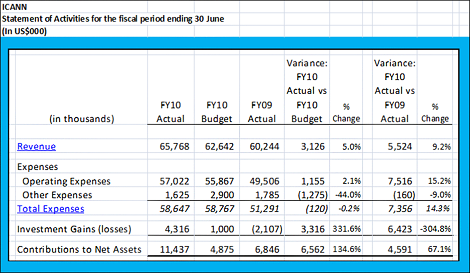 In recent years, the annual operating plan and budget process has involved increasing amounts of SO/AC leadership and community feedback. This has required us to develop a more evolved process with ever increasing community acceptance as depicted with this graphic: This new process aligns the completion of ICANN’s three planning activities — the annual update to the strategic plan, the framework for the operating plan and budget, and the submittal for adoption by the Board of the final operating plan and budget — with the thrice annual ICANN international meetings. This new approach is designed to obtain more active and earlier involvement of SO/AC leadership. In Cartagena, plans are under way for discussions with community groups on the FY12 Operating Plan and Budget development process — one meeting earlier than ever before.

On a personal note, this will be my last meeting as ICANN’s CFO as I’ll be leaving by the end of January. It’s been an honor to serve the ICANN community, Board and staff. ICANN has progressed greatly these past few years in all areas of operations including finance. I’m proud of the progress we’ve made especially in accounting controls and financial reporting as ICANN has grown from $31 million to over $65 million. I believe with the continued help of the staff, the Board, and the community the future is even brighter. Onward and upward.

I am always pleased to hear from community members, so please contact me directly if you have any questions or comments.

With much gratitude for all that you do,