Celebrating 25 Years of .TH and Much, Much More 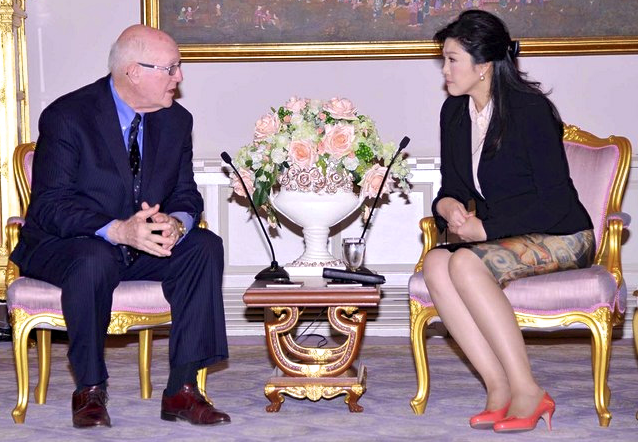 Earlier this month, Dr. Stephen Crocker and I had the privilege of visiting Thailand’s capital city, Bangkok.  We spent the week meeting with local Internet and business pioneers.

Our first official task was to attend an international conference for the newspaper industry. The combined World Newspaper Congress (65th), World Editors Forum (20th) and World Advertisers Forum (23rd) focuses on the news industry and, honestly, was not something I would traditionally expect myself attending. However when looking at the agenda and listening to talks, it became very apparent that this is an industry that finds itself at a pivotal point in its evolution. Understanding and embracing the modern online world was a central element of the conference. Dr. Crocker gave an on stage interview to Mr Pichai Chuensuksawadi, Editor-in-Chief of The Post Publishing Public Co. Ltd. The discussion was both enlightening and humorous. Apparently newspapers still print on materials made from trees, who knew?

The main event was the following day – a day of celebrations to commemorate Twenty-Five, yes Twenty-Five years since the founding of .TH. If you are in the business of making watches, baking bread, or producing other traditional staples of society, then a quarter of a century may seem like a relatively short period of time. However in Internet years, Twenty-Five is pretty historic.  It was a pleasure to sit back and listen to congratulations pour in to .TH from around the globe. I was personally very pleased to have been on the invite list. It is a great honor to know and work with people who pioneered the Internet in Thailand and who also have been long time advocates for the Internet way of doing things.

.TH has evolved from being run out of the Asia Institute of Technology (AIT) to today’s non-profit .THNIC, which is an industry leader in the region. My first interactions with AIT go back to their hosting of training sessions for their fellow ccTLDs at AIT’s Interlab, sharing their knowledge and hospitality as only they know how.  Dr. Crocker and I made a trip out to AIT to see how Interlab has faired since the floods of a couple of years ago.  We were pleased to see that they are back on their feet, although still rebuilding, and once again offering training to others in the region. We also got to see some of the really cool projects that Interlab and THNIC are working on in the realm of using networking to aid disaster recovery.

THNIC also has the distinction of being the first ccTLD in the region to sign their zone with DNSSEC!

In the evening, Pichai hosted another chat, this time including both Steve Crocker and Vint Cerf, who joined via video. As always, it was fascinating listening to them recount the early days of the Arpanet and how they have seen the world change since.

The final day of Dr Crocker’s visit included opening a DNSSEC training session, provided by NLNetLabs and the Network Startup Resource Center which focused on the importance of DNSSEC with decision makers and included multiple days of hands on training for administrators.

The trip wrapped up with a visit to the offices of the Thai Prime Minister, Yingluck Shinawarra, where we were accompanied by Olaf Kolkman (NLNetlabs), Khun Kanchana Kanchanasut (AIT/THNIC Foundation), Pensri Arunwatanamongkol (THNIC Foundation) and Dr. Thaweesak (NSTDA). The Prime Minister was very well versed in matters of technology and interested in Thailand’s participation in ICANN as well as various matters relating to the growth of the Internet.

All in all, a very interesting visit to one of Asia’s great cities.

A big thank you, Kop Khun Ma Krup, to our hosts at .THNIC