We are pleased to provide the first update on the implementation of recommendations from the Second Accountability and Transparency Review Team (ATRT2). ICANN has kicked off the implementation work, following methodology rooted in project management industry standards. ICANN community can track status and progress of implementation work on the ATRT2 Program Implementation Wiki through Implementation Executive Summaries. Updates will be provided each trimester through multiple communication channels and at ICANN meetings, beginning with ICANN51 in Los Angeles. A public session, ATRT2 Implementation Update will take place on Wednesday, 15 October 2014; 14:00 to 15:15 PDT.

The implementation of recommendations [PDF, 3.45 MB] from the Second Accountability and Transparency Review Team (ATRT2) began in June 2014, as soon as ICANN's Board of Directors accepted the recommendations through resolution directing ICANN to begin the work.

As background, the review was conducted by "16 ATRT2 members, who were drawn from the ICANN community via a public notice as well as recommendations from ICANN's SOs and ACs, and selected by the chairs of the ICANN Board and its Governmental Advisory Committee. These community members spent nearly a year reviewing, studying, questioning, debating and listening to the community as well as staff in preparing their report."1 Final report was published on December 31, 2013 and included 12 recommendations within the following areas:

ICANN worked closely with the ATRT2 throughout 2013, laying down a foundation to ensure the implementation of the recommendations would be timely and effective. An implementation methodology was designed based on the global standards of The Project Management Institute - rules, guidelines, and characteristics for the project and development of a management portfolio. The PMI standards are widely accepted with a goal towards achieving professional excellence. Benefits include a clear scope definition, company-wide resource planning, monitoring against timelines and consistent reporting.

ICANN's commitment to accountability and transparency, in the interest of Internet users globally, was formalized and documented in 2009 in the Affirmation of Commitments (AoC) agreement with the U.S. Government. It set a course for ongoing evolution and improvement in ICANN's accountability. ICANN views the implementation methodology it chose as the means of ensuring an organization-wide commitment to continuous improvement. The method of implementing the ATRT2's recommendations will serve as a pilot. ICANN will refine the approach to apply consistently to AoC and other review efforts. 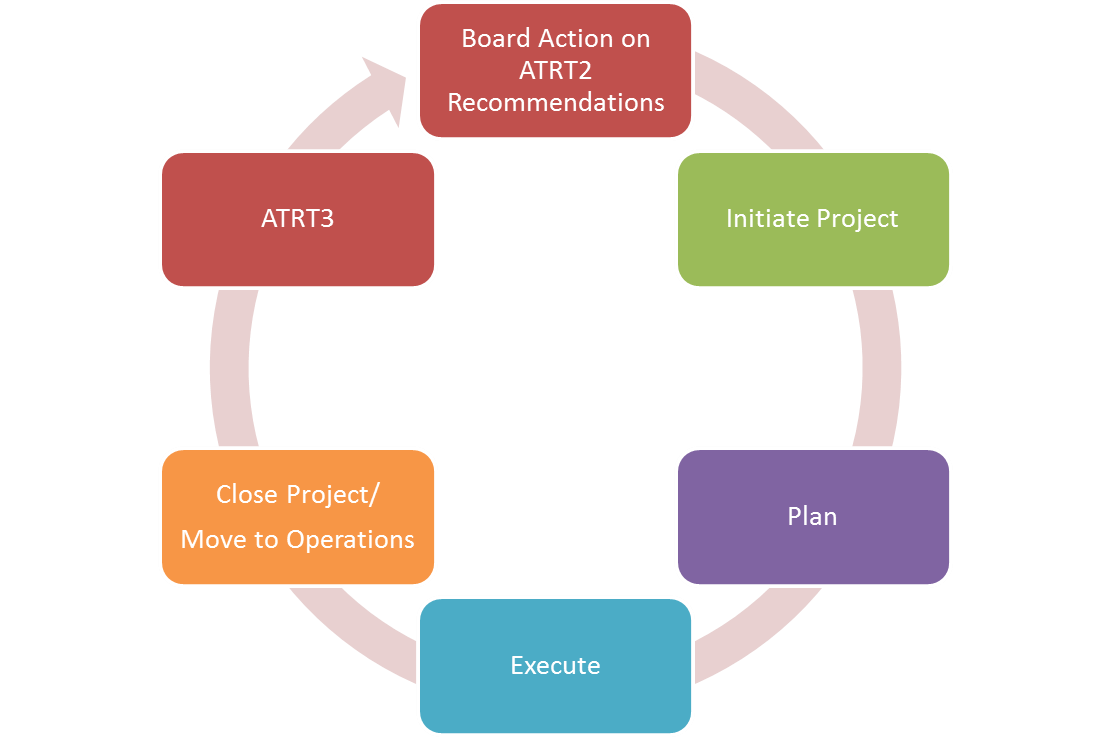 The 12 ATRT2 recommendations contain 51 components. A dedicated Project Manager is responsible for facilitating planning, monitoring progress, conducting risk assessments and providing ongoing reporting across multiple ICANN teams. Each recommendation is assigned a project sponsor and an owner responsible for planning and executing the necessary implementation steps, securing resources and tracking performance via Key Success Factors and Key Performance Indicators. An Advisory Committee consisting of several members of ICANN'S Executive Leadership team has been appointed to oversee the implementation work and ensure timely, clear and relevant reporting to ICANN Stakeholders.

With the experience of two previous Accountability and Transparency reviews, ICANN understands the importance of timely and effective communications. In fact, one of the ATRT2 recommendations specifically addresses implementation reporting. Updates on the progress of implementing the recommendations will be posted and reported each trimester through multiple communication channels and at ICANN meetings, beginning with ICANN51 in Los Angeles. A public session, ATRT2 Implementation Update will take place on Wednesday, 15 October 2014; 14:00 to 15:15 PDT.

Additionally, webinars on implementation progress will be offered periodically to provide ICANN stakeholders an opportunity to ask questions and offer feedback.

Each project will be tracked in ICANN's Portfolio Management System – stakeholders, Board and staff can see the progress on ICANN's web site.

1 How ICANN is Accountable to the Global Community, by Fadi Chehadé on February 12, 2014