ICANN and the Swiss-based Universal Postal Union (UPU) have signed a historic agreement giving the UPU managing authority over .post as a top-level domain. This agreement came about after long negotiations, public review through ICANN's public comment process, and consideration by ICANN’s Board of Directors. An equal level of effort was required from representatives of the UPU. The result is what may be the first truly secure top-level domain for the provision of services by the UPU member states.

“We are terribly excited about the emergence of .post as the newest generic top-level domain,” ICANN CEO and President Rod Beckstrom stated at the U.N. office in Geneva during a news conference immediately following the signing of the contract. “This contract with the UPU is an important contribution to the Internet. It is part of our desire to provide a single interoperable communications network that can connect all people around the globe. It also strengthens ICANN’s role as a leader in dealing with IGOs.”

UPU Director General Edouard Dayan said the .post project is an important initiative for developing and providing secure and trusted postal services over the Internet.

At the highest conceptual level, the agreement represents linking the top-level of the Internet’s Domain Name System with the real-world physical networks of the postal system, with 600,000 global physical offices and proximity to most humans. To enable its customers to take advantage of the services the UPU envisions for .post, the UPU is already installing the first computers in many villages in their local post offices to provide those services, which can include:

It is at the UPU’s discretion to set technical standards for national postal systems to join the network. 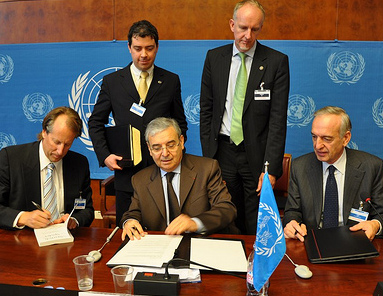 ICANN and the Swiss-based Universal Postal Union (UPU) sign a historic agreement giving the UPU managing authority over .post as a top-level domain.

In addition to the UPU-ICANN contract, ICANN also entered into another important agreement the day before in Paris with another U.N. entity, the United Nations Educational, Scientific and Cultural Organization (UNESCO).

The UNESCO-ICANN cooperation agreement is intended to assist with the process of expanding the adoption of Internationalized Domain Names (IDNs). IDNs are non-Latin based characters that can now be used on a limited initial basis in the top-level domain portion of an Internet address name, which is that portion of the name that is to the right of the dot, such as .com.

“IDNs might well lead to a huge expansion of Internet users among many who have previously felt estranged from the online world by their inability to use their native language,” said Mr Beckstrom. “This agreement with UNESCO will assist the inclusion of as many language groups as possible and, in the process, it will help ICANN fulfil its mission of global inclusivity by expanding our wide arena of international stakeholders.”

To access an audio recording of today’s UPU-ICANN news conference in Geneva, Switzerland, go to
http://audio.icann.org/meetings/upu-signing-geneva-11dec09-en.mp3.