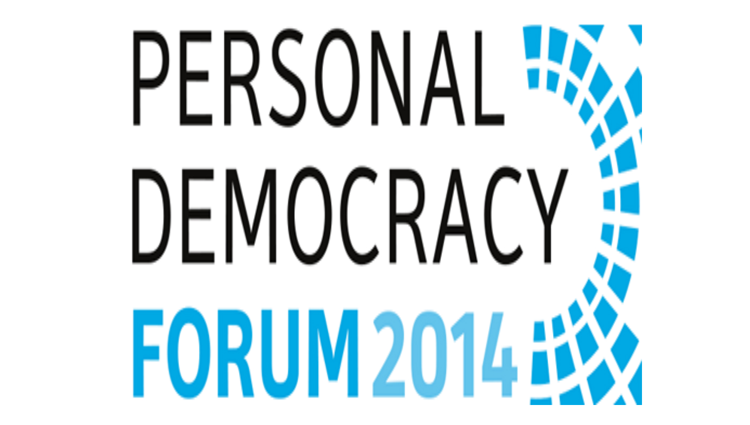 What we thought would be a good chance for engagement with civil society became a great venue for multistakeholder dialogue. Veni Markovski and I attended Personal Democracy Forum 2014 (PDF) in New York last week to hear the latest on how business, civil society, governments, and users engage with their own stakeholders, seeking lessons and new contacts for ICANN. The PDF14 theme, "Save the Internet: The Internet Saves" was certainly very topical.

PDF is an annual event featuring many innovative platforms for sparking dialogue, reinventing governance and enabling civic participation. Tech businesses were there in force. In conversations with them, they explained that they are growing more and more interested in what ICANN does, and also how it does it. The organizations we met – be they for profit or not, and many individuals – ranging from students to established lawyers and CEOs, expressed their support of ICANN and confirmed they are paying close attention to its future. They also, to varying degrees, invest time and resources in broader Internet governance issues. Clearly they are seeking insights on how to hone their positions in these debates. Civil society has a key voice that corporates continue to learn from, but there is still a lot of level setting required to get everyone to an agreed factual understanding of the issues.

There were also plenty of community organizers, nonprofits and civic groups on hand. Many participate at the PDF because they share the aim of bridging the digital divide, no matter where it happens. The panelists and speakers also had a lot to say on free speech, privacy and surveillance. There was even a session at which Wikileaks' Julian Assange spoke via video about NETmundial.

Despite some sessions being promoted as covering the topic of global Internet governance, - the talks did not rise above scrutiny of the behavior of individual national governments or corporate entities. The dialogue rarely got to the big picture of how to cooperate across stakeholder and political boundaries going forward.

Still, lots of presentations described innovative ways for group decision-making, community building, engagement and stewardship of resources. One speaker reminded us "the Internet isn't magic". What she meant was: Just because the Internet connects a lot of people doesn't mean those people are suddenly going to become active volunteers or community leaders. This is a fact of life familiar to ICANN community members engaged in outreach. The speaker's corollary observation was that there is a steady proportion of any population that gets involved as participants in policymaking and governance activities. Connecting with these individuals is the key.

Given the theme of the conference, many speakers were well known in Internet governance circles. Activist and author Rebecca McKinnon described how alliances among activists, government officials and corporations are needed to effect change. On the other hand, former ICANN board member Susan Crawford made a compelling case for when more confrontation is required.

The number of government sector attendees and speakers was up from previous years as well. They included the U.S. State Department, the City of New York, the European Parliament, and the UK Cabinet office, among others. It is interesting to see the cross-cultural learning and dialogue take place across stakeholder categories, just as it does at ICANN. And of course attendees were tweeting and blogging away on their devices in real time, a familiar feature of these conferences.

Another pleasant surprise was how many of the attendees know about ICANN and its role. One recent graduate said, "I love ICANN". - he had written his thesis on multistakeholder models of governance. It was enough to make anyone from the ICANN community optimistic about the pipeline of future stakeholders.