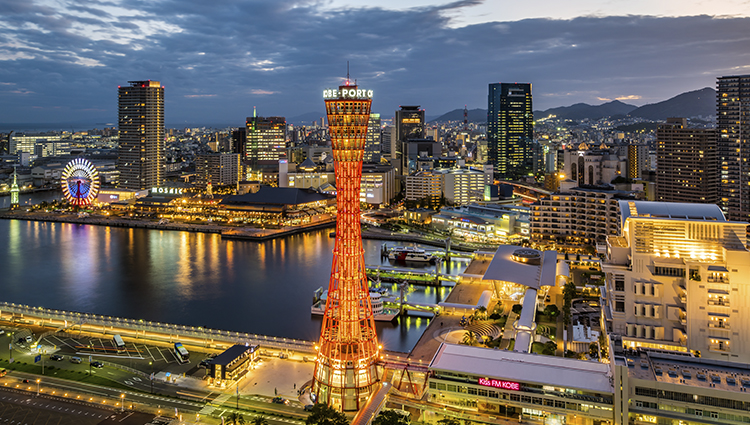 Perched between Osaka Bay and soaring Mount Rokko, Kobe is diverse and surprising. The Kobe, Osaka, and Kyoto metropolitan area, known as the Keihanshin region, is the second most populous area in Japan behind greater Tokyo. The port city of Kobe was one of the first Japanese cities to open up for trade with the west in the early 19th century, and Kobe has retained its cosmopolitan flavor ever since. Before you get to work at ICANN64, read my top 10 list of things you might be surprised to learn about Kobe, Japan.

1. Karaoke was invented in Kobe. Daisuke Inoue was a (self-described) mediocre musician playing in Kobe clubs when a businessman asked Inoue to record some background music to accompany his singing to impress his colleagues. Inoue told Time Magazine this gave him the idea for what became the first karaoke machines. Karaoke soon took off in Kobe clubs, and then Osaka, then Tokyo, and soon the world. Inoue never took out a patent on his invention, so he never became rich. But in his first-person account of how he invented Karaoke on history blog “The Appendix”, he describes how he found success in other ways:

“I now live on the top of a mountain in Kobe, Japan, with my wife, my daughter, her three daughters and eight dogs… I have good friends and family that I love, and I can’t help but smile every day.”

2. The K supercomputer – a play on the Japanese word kei (京) meaning “10 quadrillion” in Japanese – was once the world’s most powerful supercomputer, but now ranks around 18th. Housed at Riken Center for Computational Science in Kobe, the K was the first supercomputer in the world to achieve a computing speed of over 10 quadrillion computations per second. Scheduled to be retired in August to make way for its much more powerful successor, the K has been used to estimate damage by earthquakes and to discover new drugs.

3. Kobe has long been home to Japan's best sake – an alcoholic drink made from fermented rice. Local connoisseurs credit the superior mountain water and the premiere rice used in sake production, which is grown locally. Sake is experiencing an international boom, and exports hit a ninth-straight record high in 2018.

4. The first INET conference organized by The Internet Society was held in Kobe, Japan in 1992. INET cofounder Lawrence Landweber called Kobe INET ‘92 “a groundbreaking event in the development of the Internet.” More than 600 stakeholders, policymakers, technologists, and academics from more than 60 countries attended. Kobe INET ’92 was also the forum for the Internet Society’s first board meeting led by Chairman and future ICANN Board Chair Vint Cerf, and the first meeting of the Internet Architecture Board.

5. Himeiji Castle near Kobe is one of Japan’s 12 original castles and a UNESCO World Heritage Site. The Shogun-era complex is also known as the “White Heron Castle” due to its elegant, white appearance. First built in 1333 and expanded in 1609, Himeiji has withstood war, fire, earthquakes, and financial distress. The castle complex has served as a backdrop for many movies, including Sean Connery as James Bond in “You Only Live Twice”.

6. The Akashi Kaikyo Bridge is the longest suspension bridge ever built, designed to withstand typhoons, tsunamis, and earthquakes. The Bridge spans across the Akashi Strait, which is a busy shipping lane, linking Kobe with Awaji-Shima Island. The engineers used a system of counterweights, pendulums, and trusses to handle up to 180 mile per hour winds and an earthquake up to 8.5 on the Richter scale.

7. Japan’s lightning fast bullet trains – the Shinkansen – made their inaugural journeys from Tokyo to nearby Osaka just in time for the 1964 Tokyo Olympics, and now is one of the busiest high-speed rail systems in the world. Although the trains go up to almost 200 miles per hour, the Shinkansen system has never had a fatal accident in its 50+ year history. Japan sees the future of high-speed rail in maglev technology, which uses superconducting magnets to levitate the train above the tracks.

8. As one of the most volcanically active countries in the world, geothermal hot springs (called “onsen” in Japanese) are popular attractions across much of Japan. Arima Onsen outside Kobe tucked behind Mount Rokko is one of the oldest and most culturally significant spa towns in Japan.

9. Kobe is known as the center of the jazz music scene in Japan. As a port city with Western exposure, Japanese musicians were playing jazz in Kobe as early as 1923, and popularity soared further after World War II. Duke Ellington and Louis Armstrong played in Kobe multiple times. Most live clubs are centered in the Kitano district, and the “Kobe Jazz Street” festival takes place there every October.

10. The world-famous Kobe beef comes from a regional breed of Wagyu black cattle named after a local mountainous area, Tajima. Producers claim to have kept the Tajima cattle bloodline pure since the 17th century and only 5,000 cattle are sold a year. Due to the rigorous standards, true Kobe beef is rare and expensive.