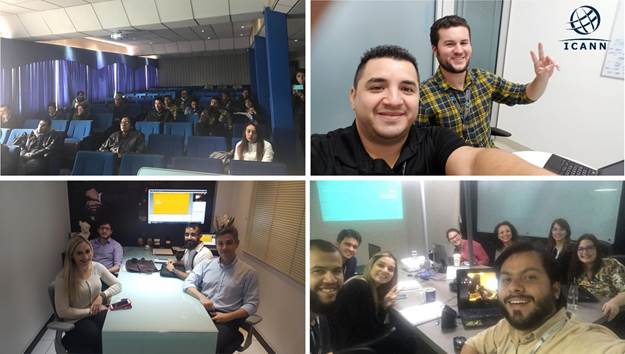 You may have heard about ICANN's readout sessions – an engagement tool first implemented by our colleagues of the Asia Pacific (APAC) team a few years ago. Since then, other regions have followed suit, including our team in the Latin American and the Caribbean (LAC).

Session readouts are a great way to increase regional engagement and summarize the events of ICANN Public Meetings for those who could not attend in person. They are often composed with local flavor and tend to be content-friendly for newcomers. A member from ICANN's Global Stakeholder Engagement (GSE) team is usually on hand to facilitate the readout and to guide the discussion around meeting highlights and important topics. This formula has worked well in the LAC region, but for ICANN62, we wanted to do things a little differently.

At the ICANN62 readout session, we wanted to make sure there was a healthy mix of both face-to-face interaction and remote participation in an effort to deepen our engagement with the local community, while expanding our reach regionally. A key element of this new readout format was hosting the session at our regional office in Montevideo, Uruguay. As you may know, the LAC team is lucky to share its office space with various Internet-related regional organizations (LACNIC, LACTLD, ISOC, ASIET, ALAI, RED CLARA, eCOM-LAC), thus making it easy for them to attend the session. Oscar Robles, CEO of LACNIC, also joined the readout and presented on global policies currently being discussed by the Regional Internet Registries (RIRs).

In addition, we invited various Uruguayan stakeholders to join the readout in person. We had the pleasure of welcoming the Uruguayan GAC representative, a member of an active LACRALO's At-Large Structure (ALS) from Montevideo, a colleague from the .UY country code top-level domain (ccTLD), and a representative from the domain name industry in Uruguay.

While we gathered at the regional office in Montevideo, others from our community organized "remote hubs" for the readout in Brazil, Mexico, and Bolivia. The remote hubs invited their local communities to attend and held introductory discussions about the Domain Name System (DNS) and ICANN prior to the session.

The readout agenda was organized into two main sections. The first part was a report of what happened in each of the Advisory Committee (AC) and Supporting Organization (SO) sessions at ICANN62. The second part focused on high-level topics such as GDPR and EPDP, among others. To cover these topics, two members of the ICANN Board from the LAC region, Lito Ibarra and Leon Sanchez, joined, along with other regional leaders from various groups representing Peru, Chile, Argentina, Colombia, and Guatemala.

The ICANN62 readout session strengthened our belief in the importance and usefulness of the readouts, which not only provide a helpful meeting summary for people who could not attend in person, but also serve as a great platform for those who want to share their ICANN experiences with their respective organizations.

We hope to replicate this experience after each ICANN Public Meeting, so stay tuned for the next readout session after ICANN63.