A Review of the Eastern European DNS Forum: First Takeaways

On the 28 January, a community survey was sent out to previous participants of the Eastern European DNS Forum and the regional community as a whole.

The survey aimed to understand participant satisfaction and solicit feedback on improvements that could be made to the DNS Forum format and content. It also asked respondents to provide their views and input on the effectiveness of the forum as an:

The survey ran online for three weeks, closing on 15 February 2019 and was available in Russian and English.

According to the data obtained, on average some 60% of respondents agreed or strongly agreed with various aspects of the forum's effectiveness. 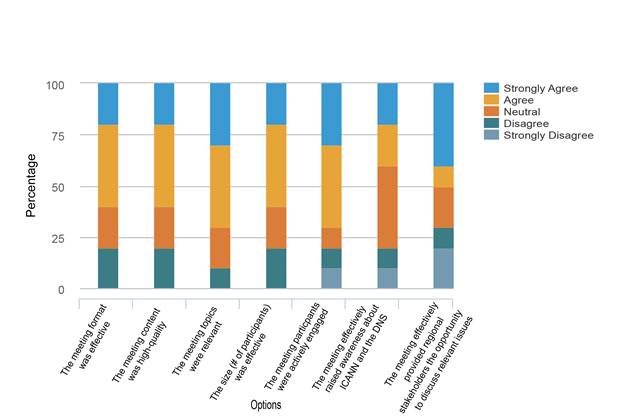 Respondents also had the opportunity to elaborate on their answers. Some responses were similar to internal takeaways we had from previous editions of the EEDNSF. Some other feedback indicated possible areas for improvement both in format and content.

For example, one of the suggestions received was to have broader participation in developing the agenda to ensure a broad range of topics were covered. Typically, the agenda is mostly created by ICANN and the local host, with the option to submit a presentation proposal on the website starting with the Forum held in Minsk in 2017. Based on this feedback, we intend to investigate more opportunities for the community to participate in creating the agenda for the next event.

Another theme from the feedback received was for more information on the policy building processes in ICANN and how to get involved. Acknowledging this important aspect, we've already introduced this, starting at the Forum in Moscow, last December. There was a dedicated session on how interested community members could participate in ICANN's policy development, as well as the typical challenges involved.

Other suggested topics for future events were DNSSEC deployment, a continued focus on DNS abuse, as well as local legislative peculiarities. The latter was featured in the Moscow forum in December and remains an important topic for ICANN, including recent effort on identifying and regularly reporting on legislative developments around the world that could have an impact on ICANN's mission or operations.

Other feedback included a recommendation to diversify the format of the sessions and make them more discussion driven. And some of you expressed you'd like to have more direct recommendations for the regional community as an outcome of the event. Equally, we would like to invite you to advise us on what are your main concerns, experiences and insights!

Last but not the least, I'd like to thank everyone who took time to share your thoughts in this survey, and we'd certainly welcome more these events in the future. In the meantime, we will be taking your feedback on board as we prepare for the 2019 Eastern European DNS Forum, so stay tuned for more information soon!

Since its creation in 2016, the Eastern European DNS Forum (EEDNSF) has been hosted in three countries, attracting around 700 participants from over 10 countries. The Forum started as a co-branded project with UADOM in Kiev. While the second Forum, was held back-to-back with ENOG14, as part of the Minsk Internet week. The most recent Forum saw ICANN's flagship EEDNSF event in Moscow, our first in Russia. The EEDNSF has grown to become a platform for cross-community interaction and sharing of DNS experiences and knowledge.