To provide more opportunity for community consideration and public comment on a draft ICANN Vision and 5-year Strategic Plan, the development schedule has been extended to accommodate two rounds of online public input, and community discussions at the ICANN Buenos Aires (November 2013) and Singapore (March 2014) meetings. In addition, to more tightly link the multi-stakeholder processes used for developing ICANN's strategic, operating and budget plans, as well as for commenting on the ICANN Strategy Panels, the schedules for these processes have been aligned. Specifically, public comment schedules for Strategic Planning, Strategy Panels, and the Operating Plan and Budget have been adjusted to maximize community input. The corresponding schedules are illustrated below.

Strategy Panels – To provide more opportunity for community consideration and public comment on the Panels' output—and to more clearly connect the Panels to ICANN's multi-stakeholder strategic, operational, and budget planning processes, the Panels' schedule has been escalated. ICANN President and CEO, Fadi Chehadé, is asking the Panels to provide strategic recommendations by the end of January 2014. (Panel membership will be announced shortly). Panel output will be posted for public comment 31 January—31 March 2014, and will be discussed by the community at the ICANN Singapore meeting in March. This allows time for public discussion and community engagement on the Panels' output, and integration of comments and recommendations into the Final Strategic Plan, as appropriate. This schedule also enables the Panels' recommendations to be factored into the FY2015 Operating Plan and Budget, which currently is scheduled for Board action by 21 June 2014.

Strategic Planning – The First Draft of an ICANN Vision and 5-year Strategic Plan will be posted on or before 28 October 2013 for public comment through January 2014. This will include community discussions at the ICANN meeting in Buenos Aires next month. Factored into the First Draft will be the extensive public input received thus far on ICANN's key challenges and opportunities and on the eight strategic areas [PDF, 209 KB] highlighted by ICANN's Board of Directors. Work and input on related initiatives, such as the Security, Stability & Resiliency Framework, and the Regional Engagement Strategies, also will inform the First Draft. Comments received on the First Draft, as well as on the output of the Strategy Panels, will be considered and incorporated, as appropriate, into a Final Draft. The Final Draft of ICANN's Vision and 5-year Strategic Plan will be posted for public comment by early March 2014 and discussed by the community at the ICANN meeting in Singapore, before being finalized at the end of April 2014 and submitted for Board action.

Operational Plan & Budget – The schedule for development of, and comment on, the FY2015 Operational Plan and Budget is expected to run from January – June 2014. The draft schedule is illustrated below and is expected to include public comment and community discussion for the proposed FY2015 Operating Plan beginning in January, followed by comment and discussion of the proposed FY 2015 Budget beginning in April. This will include opportunities for community engagement on the proposals at the ICANN Buenos Aires and Singapore meetings. The FY2015 Operating Plan and Budget is schedule for Board approval by 21 June 2014. A final schedule for this process will be posted on 15 November 2013. 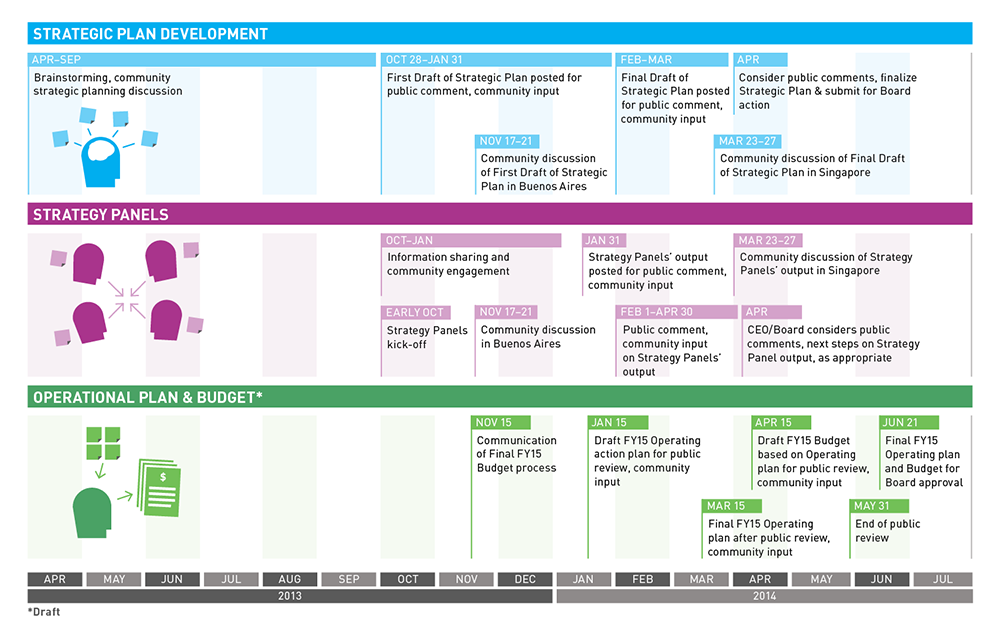