18 October 2012… ICANN and the Africa Network Information Center (AFRINIC) have signed an agreement pledging to work collaboratively to identify additional potential locations for the expansion of L-Root anycast instances in Africa.

The placement of instances of root servers is important to the infrastructure of the Internet in Africa.

"This agreement comes in at a perfect time here in Toronto when ICANN has unveiled a new initiative to increase presence and participation across our region" said Adiel Akplogan, AFRINIC's Chief Executive Officer. "Besides policy related discussions and participation, Africa needs to strengthen the resiliency of its Internet Infrastructure in order to attract local contents investments."

"This very important agreement is a further reflection of the hard work of the Africa stakeholders and their spirit of engagement" said Fadi Chehadé, President and Chief Executive Officer of ICANN. "Our commitment to this sort of cooperative effort is framed by the initiative of the Africa Support Working Group, which is aimed at increasing African participation in ICANN."

The Africa Support Working Group presented its three year initiative during ICANN's 45th public meeting in Toronto, Canada. The agreement between AfriNIC and ICANN marks the first implementation of the Africa Strategy.

Under the signed agreement, AFRINIC is willing to help ICANN strengthen the resilience of the DNS further by helping to identify potential additional physical locations that host L-Root.

Using geographically diverse locations for name servers strengthens the global Internet because a dispersed system cannot be taken offline by a problem at any single instance of a given DNS root server.

"L-Root" refers to one of thirteen computers that anchor the globe's Domain Name Service (DNS). Where computers locate one another on a network by numeric address, humans find it easier to use and remember names (for instance, users typically remember "ICANN.org" more easily than its IP address, 2620:0:2d0:200::7.) The Domain Name System matches domain names with their correct numeric addresses on the Internet. 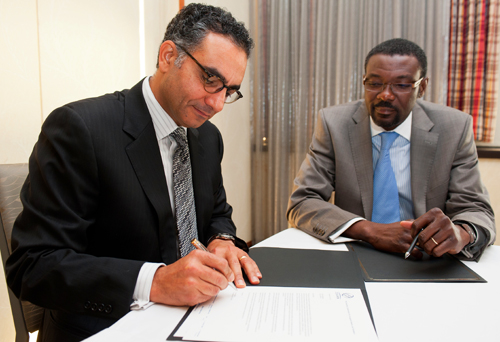