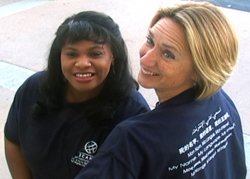 ICANN is celebrating the ability of people to get "My name, My Language. My Internet" wiki pages with the launch of the IDN evaluation with T-Shirts displaying example.test in the 11 languages.

MARINA DEL REY, Calif.: Internet users around the globe can now experiment with their name in their language on their Internet with today’s launch of the Internet Corporation for Assigned Names and Numbers live testing of Internationalized Domain Names in 11 languages.

"This is one of the most exciting times yet in the development of IDNs," said Dr Paul Twomey, ICANN’s President and CEO. "Internet users who speak the 11 languages of the test can play a key role in testing how IDNs operate, and help us move toward full implementation for all the languages of the world."

Internet users around the globe can now access wiki pages with the domain name example.test in the 11 test languages -- Arabic, Persian, Chinese (simplified and traditional), Russian, Hindi, Greek, Korean, Yiddish, Japanese and Tamil. The wikis will allow Internet users to establish their own subpages with their own names in their own language -- one suggestion is: example.test/yourname.

ICANN has also put a video explaining the evaluation process on YouTube, and available on the ICANN website.

The wiki pages can be accessed by typing example.test in the characters of one of the 11 languages, or by going to http://idn.icann.org.

"These wikipages are key to the test. We want to know how the URL displays in the Internet browser, if it works when you cut and paste it into the body of an email to a friend, and how all of this impacts the root zone," Dr Twomey added.

The 11 evaluation wikis will remain online until IDNs are fully implemented and the first top-level domain is introduced in the evaluation language.

The full introduction of IDNs will mean that people can write the whole of a domain name in the characters used to write their own language. Presently you can only use these characters before the dot, so .com, .net, .org and the like can only be written in characters from basic Latin. IDNs will change this so that literally tens of thousands of characters will be available to the world. 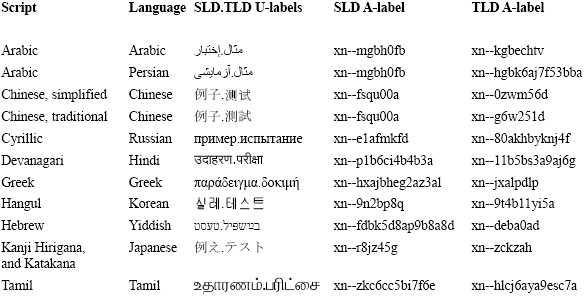 The "example.test" labels with the associated scripts, the languages that were used for translation of the two terms "example" and "test", and the A-labels for second and top level that are inserted in the IDN TLD zones and DNS respectively.

In an effort to get this message across to as many people as possible, ICANN has created two short IDN videos, which you can see below. In keeping with the multi-lingual nature of IDNs, we have used video service DotSub which allows ordinary Net users to translate subtitles into whatever language they wish. We have undertaken to have both videos translated into the 11 languages of the wiki tests, but you if you wish to make the video available in your language, all you need to do is register with the site, log in, go to the relevant film and then go to the "translate this film" box on the right.

To see both films in a number of languages, simply click on the up and down arrows at the bottom of the screen to scroll through the available choices.

IDNs Part One: An Introduction (4:22) | also available at YouTube

ICANN is responsible for the global coordination of the Internet's system of unique identifiers like domain names (like .org, .museum and country codes like .uk) and the addresses used in a variety of Internet protocols that help computers reach each other over the Internet. Careful management of these resources is vital to the Internet's operation, so ICANN's global stakeholders meet regularly to develop policies that ensure the Internet's ongoing security and stability. ICANN is an internationally organized, public benefit non-profit company. For more information please visit: www.icann.org.